So it has been a bit slow year for me truth be told, with most of my work on the Blood Wiki being restricted to incremental changes. I have done some significant reformatting to the main page layout to make sure it scales better on varied displays, something which has also been reflected in some of our articles. I also played through ZBlood for the first time and took the time to properly document the game, sorting out which was the final version and even putting it up for download here as I could not find any other reliable source. I also continued with our screamshot drive by taking a bunch of consistent shots of Blood II in WINE for the main page; though the subsequent blurring of some of the textures has led me to pause until I can get myself access to a native install of the game. Speaking of WINE, I have now played through all of F.E.A.R. using the GOG.com release of the game, leaving No One Lives Forever as the last major Monolith shooter franchise I have yet to try.

I would also be remiss if a lot more humble if I failed to mention how Jason Hall actually used my own words to promote Blood on his website over the summer; Rick Raymo also sent me a lovely if brief missive to thank me for them in an email he sent me last October.

Hopefully the new year will grant us with even more progress, and an even more active Blood community. Tchernobog (talk) 23:48, 12 January 2017 (UTC) 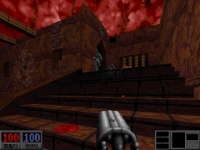 As Tchernobog said, a bit of a low key year, but then most of my edits last year were right at the end of 2015. This year most of my edits are from early 2016, reflecting rather one long stretch of enthusiasm which happened to coincide with the last anniversary right in the middle. We seem to go in fits and stops, possibly due to how our brain cycles adapt to our seasonal jobs both on our own farm and at the apiary we are employed at over the summer and autumn months...

So anyways, in terms of the arbitrary division, the main work I have done since January 12, 2016 was reformatting, curating and expanding our List of Mods article. This included most notably the spinning off of several sections into their own articles, expanding upon work started with our Death Wish, Rage Against the Machine and Extra Crispy articles. I also wrote new articles for several mapmakers such as Dustin Twilley, Martin and Jason Brentnall, David Wikström and others (the former and latter expanded via e-mail interviews). The new table system for Best of Blood.Freeminded.De and Blood Chronicles also presents our collective best foot forward in terms of individual Blood custom levels, as did my general attempts to make sense of the RTCM and Blood.Freeminded.De catalogues. I also reformatted the List of Websites article along similar lines.

Other efforts including reaching out to our brothers in edit buttons with our Wiki Index, as well as serious expansions of the WizardWorks Software, Priest (having read the first few volumes from the library) and Claw articles, as well as creating the BloodCraft article. Oh, and I also wrote up some of my thoughts upon FPS - First Person Shooter. I also made a good stab at making a development article for Shogo similar to those for Blood and Blood II, but still need to finish it (I did however transcribe the game's credits). Finally also figured out what happened to Jeremy... err... Rachel Blackman, a mystery that initially confused me, even if the answer is somewhat obvious in hindsight (no offence intended).

As for how my year in general? This article just about covers it... Oh, wait, not quite. It also involved troubles with coyotes, chickens, and cows... Gideon (talk) 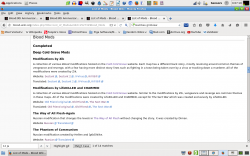 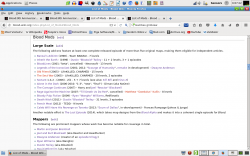 Note: This year's article before and after is, naturally, List of Mods. The List of Mods#Blood_Mods section to be exact.

Below is a list of contributions by user up to January 12, 2017, sorted from greatest to least. This is a rough number however, since it includes edits to talk and user pages as well as submissions to articles. Also, Gideon and Tchernobog have used each other's accounts on occasion depending on which computer they were using at the time. This also includes all edits from past years, and contributors who have not made an edit in the past year.