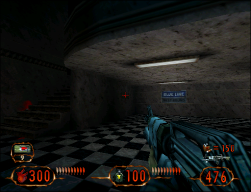 C2L5: Horlock's Station is the sixteenth level in the game Blood II: The Chosen, and the fifth level of the second chapter (map name: 12_trainstation). It resembles a modern train station, with some construction implements.