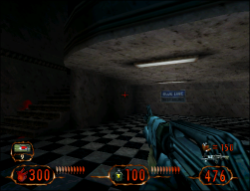 C2L5: Horlock's Station is the sixteenth level in the game Blood II: The Chosen, and the fifth level of the second chapter (map name: 12_trainstation). It resembles a modern train station, with some construction implements.

"Follow the alley around, and use the dumpster to get onto the elevated tracks. Quickly make your way into the tunnel toward the 'Cabalco' sign (the same direction as the train is heading). Jump up on to the platform to your right. Walk into the next room (use the ledge on your left to get to the Batteries) and go down the stairs. At the bottom, you'll find a crawl space. Crouch down and make your way to the street outside (need I warn you that Thieves are lurking in the crawl space, also there's a Voodoo Doll here if you haven't already gotten one). Go down the street, and up the steps. You can't get into the front door of the station, so you'll have to jump into the open window in the nearby tenement. Follow the hall (search the first room to find a Sniper Rifle and some Binoculars), go down the stairs, and into the room (it's the last door you'll find). Search the apartment to find some supplies. Smash the window and jump out onto the fire escape. Climb down the ladder, and enter into the tunnel before you. Follow the alley around, and enter the "Choke & Puke Diner." Go through the door into the kitchen, and shoot the oven to blow a hole in the wall. Go through the hole into the restroom of Horlock's Station. Walk out of the restroom, and go up the steps. Take the hall to your left (you'll find a Willpower power-up if you take the hall to your right, but there's nothing else that way, except for monsters), and keep walking until you get to the Downtown Express Train Platform (it's near the soda machines). Go through the doors, and enter the tunnel to end the level."--Baytor's Guide