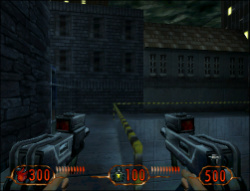 C2L6: Love Canal is the seventeenth level in the game Blood II: The Chosen, and the sixth level of the second chapter (map name: 13_downtown). This level is a long water canal/lock.

Sick of throwing your hard-earned money down the tubes in rent? Of course you are! That's why your friends at Cabalco Home Construction and Real Estate have just finished a darling new subdivision. We know land is expensive and scarce so we went ahead and dumped some fresh loam over that nasty old radioactive/toxic cesspit at Love Canal! A new house from Cabalco has never been so cheap! And, if you're planning a family, buy big! Please disregard any rumors you've heard about infertility, general malaise, constant vomiting, the ubiquitous 'three-headed love child' or any other such nonsense. Here at Cabalco we care and our housing prices are more than fair!

"If you want the goodies on the ledge to your right, you'll have to act quick and jump to it from the elevated track. Otherwise, you'll never get them. Jump down to ground level and follow the alley to the pool. Collect your supplies and jump down. Follow the tunnel into the next area, smash the grille, and follow that tunnel until you see a ladder. Climb up and activate the switch. Jump back in the water and continue down the tunnel. After you drop down, jump out of the pool. There's two doors and a hall. One of the door has some stairs which lead back up to the surface. The other to a small room with a panel (doesn't appear to do anything). Follow the hall (taking care not to be hit by the bursts of water), and go up the steps in the next room. Enter the passage and follow it to a room with some black liquid pouring down from the ceiling. Follow the path to your right to a darkened room. Use your flashlight to navigate through the holes in the floor to the stairs on the other side of the room. Go up the stairs into a large corridor with a catwalk up above (there's a Sniper Rifle in an alcove to your right). Follow the passage to your left, up the ladder, and follow the catwalk around to another passage. Follow this back to the room with the black liquid pouring from the ceiling (hope you picked up the Napalm Launcher on the way there). Walk through the black liquid and keep going forward. Near the end of the passage, is a path to your right. Take it, and go up the stairs. Follow the hall until you get outside. Enter the area to your right and activate the first of three wooden levers (hi-tech, isn't it?). Follow the passage over to your right, and keep going until you find the boat. Jump into it, and activate the panel in the bridge. When the boat goes into the next lock, jump into the water, and climb up the ladder. Take the stairs in front of you, and activate the second wooden lever. Return to the boat, and activate the console again. When the ship goes into the next lock, jump into the water, climb the ladder, and activate the third switch. When the boat finishes rising. Jump on top of it, and use it to get to the door on the opposite ledge. Go through the door and follow the hall to the train station. Walk down the stairs (taking care to avoid the Hands), and follow the hall to the train tracks. Jump down on the tracks, and climb up on the opposite platform to end the level."--Baytor's Guide