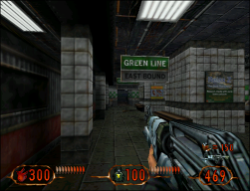 C2L8: Horlock's Station 2 is the nineteenth level in the game Blood II: The Chosen, and the eighth level of the second chapter (map name: 12_trainstaionb). It uses virtually the same map as C2L5: Horlock's Station, but allows access to the "Blue Line".

Ha! That bastard Gideon thought he would lose you by pulling the ol' switcheroo. Fat chance fancy pants! When you catch him he's definitely in store for your own brand of switch. Let's see, you could start by taking his head and changing his view to something a bit more inward looking. You can bet that since he's had his head up there so long, he'll find the perspective familiar. Into the breach, and all that. Well, enough warm thoughts... there's a job at hand and this time that Blue Line is gonna get painted red. Blood red.

"Follow the passage back into Horlock's Station. Once you're back inside, follow the hall to your right until the Drudge Priests teleport in to attack you (this is right next to the restrooms). Go down the steps, and head toward the Blue Line (after coming down the steps, it's behind you and to left). Keep going until you get to the tracks. Jump down and follow the tunnel to your right to end the level."--Baytor's Guide