From Blood Wiki
Jump to navigationJump to search
Dustin Twilley 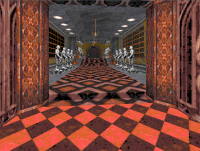 "I started making maps for Duke Nukem 3D in 1996, which was the first FPS I ever played. I switched over to Blood in 1997 and quickly picked up Mapedit since it was so similar to Duke3D's Build but had notable improvements that really sped up development (like a visualization of sound effect range in 2D mode — you just had to guess in Build)."--Dustin Twilley, January 19, 2016

Dustin "Bloatoid" Twilley (often misspelled as Twiley) is a well known mapper for Blood, and author of Inherit the Earth (1999), Hostile Takeover (2001), and Death Wish (2011, 2017-2020). Death Wish holds the distinction of being one of the most ambitious custom add-ons for Blood ever made, and alongside Twilley's earlier work it represents one of the most extensive collections of any Blood mapper. Since 2013 he has been working on games professionally at Ghost Crab Games with Chris Hoopes on Drive To Hell and currently Hastilude.

"Most early Blood maps are unrelated — I'd make something and throw it up on Beavis53's webpage (the best place to get user content at the time) and that would be the end of it. I played the Gods add-on and wanted to see if I could modify the .bat and .ini files from it to make my own launchable episode, so I threw together 2 levels and a poorly made boss map to create Dark Sun Rising, which was an experiment more than anything else. At this point I had a ton of separate maps scattered about but now I could string them together into something bigger."--Dustin Twilley, January 19, 2016

A loose mod of his is Dark Sun Rising, compromising of two single player levels plus a boss level.

He has also uploaded two stand alone maps: Outbreak and Da' Lab, and two other maps were uploaded without citing him: Biosyn and Manmons. All except "Outbreak", which was released later, were included in The Best of Blood.Freeminded.De alongside Inherit the Earth and Hostile Takeover. "Outbreak" is however included in the second volume of Blood Chronicles, alongside Dark Sun Rising.