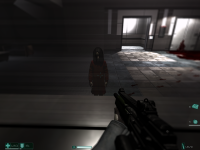 "An unidentified paramilitary force infiltrates a multi-billion dollar aerospace compound, taking hostages but issuing no demands. The government responds by sending in Special Forces, but loses contact as an eerie signal interrupts radio communications. When the interference subsides moments later, the team has been obliterated. As part of a classified strike team created to deal with threats no one else can handle, your mission is simple: Eliminate the intruders at any cost. Determine the origin of the signal. And contain the crisis before it spirals out of control."--Monolith website

F.E.A.R. is a first-person shooter computer military horror PC game developed by Monolith Productions, designed by Craig Hubbard and based on LithTech "Jupiter EX". The game play consists of basic first-person run-and-gun action, but adds some twists like time manipulation, better artificial intelligence, and particle effects. The game was also noted for its tense atmosphere, similar to J-Horror. It is similar to the Blood games for its horror themes, although more science fiction inspired. Its nods towards Japanese horror and more importantly other Japanese influences also makes it in some ways a spiritual successor to Shogo: Mobile Armour Division (which also featured the Armacham Technology Corporation). This design actually dates back to the early development of The Operative: No One Lives Forever, which was started right after Shogo.

A sequel F.E.A.R. 2: Project Origin was released on February 10, 2009. Both of these games are available from GOG.com complete with expansions and bonus content. A third game in the series was also released on August 26, 2011, but developed by Day 1 Studios on a different engine.

A ModDB page for an attempted Blood mod for the game was posted on November 27, 2005, but never followed up on.