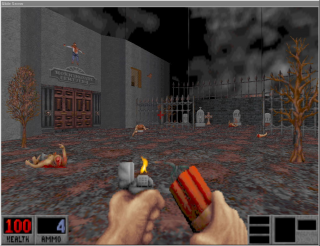 Glidos is a tool that can be used to improve the graphics of Blood on Microsoft Windows systems using the Glide API with 3dfx video cards like Voodoo, furthering work first started in an official alpha patch.

It was originally created by Paul Gardiner in 2001 for the original Tomb Raider game. It was expanded from there to support Descent II, The Elder Scrolls Adventures: Redguard, Carmageddon, the original Grand Theft Auto, Extreme Assault, Dreams to Reality, Screamer 2 and Red Baron as well as Blood.

Blood required special programming in Glidos, which gives better results than on an actual Voodoo card. With a Voodoo card textures are smoothed only in one direction, whereas Glidos gives true bilinear interpolation.