Killing Time (also called Caleb in Time) is a seven level fan add-on for Blood released on February 28, 1999 by Marc "Elmo" Levesque, also the author of the single-player map "Volcano" (download; not to be confused with "Volcano" by ItBurn) and the Bloodbath map "Snowtraps", and was beta tested by Slime Bob.

It is seemingly not related to the 1995-96 first person shooter of the same name, despite its own striking similarities to Blood.

It was included in the The Lost Episodes compilation as Episode 4, as well as stand-alone in BME's Blood Map Pack.

Caleb emerges from a stone brick bunker to charge across and down the trenches and outer defences of a well outfitted Cabal command centre, storming his way through several scenes of automated torture and officerial comfort. Upon gaining access to the basement, Caleb rides a metal boat down an acid river and is faced with Tchernobog's seal. Upon pressing it however, he is greeted by one or more Mother Spiders which then guard the true exit (C1T1: The Bunker).

He emerges out of a pumping station channelling an icy river, and is greeted by the spectre of a massive flying saucer floating over the frosty forest. Activating a lift, Caleb is whisked aboard the ship and fights his way through, facing a Cerberus in a lava filled hold, before eventually reaching the quite well guarded bridge. Messing with the controls, the ship crashes into an alp and Caleb begins to carve his way back to the surface (C1T2: We Come in Pieces).

Caleb escapes through more subterranean caverns, coming across a morgue, chapel and hydroelectric generator, before subsequently opening into a nearby railway tunnel. This opens up a cliff-side recess containing two time portals, one marked Europe 1060 AD and the other Egypt 2600 BC (CT13: 666 Feet Under).

Curiously, either portal will take the player to Ancient Egypt, placing Caleb just outside a step pyramid on the banks of the Nile river. The entrance to the edifice is stuck, and a hidden underground gate accessible via a pond is locked, but admittance into the tomb can be found from an adjacent sink hole. From here he dodges tricks and traps and unlocks his way through, making it to the central treasure chamber. This releases a switch on the pinnacle of the pyramid which opens up a crack that leads to another temple. Therein lies a series of oddly familiar trials, namely a sequence of false and true floor tiles to hop between and a leap of faith across a chasm. This finally leads to a display of false, and presumably one true, holy grails. Diving into a fountain of holy water leads to the exit (C1T4: Egyptian Kingdom).

Caleb blasts through a cave-in and gains access to a coastal fortress, patrolling along the perimeter before gradually unlocking his way deeper into the interior. These feature a grand dining hall, a library, bedrooms, kitchen, an attic with skylight, a lounge complete with pipe organ and decorative waterfall, and thereafter dungeons. This reveals a passage descending through a series of mine shafts, quarries and a furnace, ultimately leading to the way out (C1T5: Citadel).

He is taken to a mountaintop occult monastery, bursting his way through ritual sites, perilous ledges, sacrificial altars and tests of pain and atonement. He crosses a bridge into a further cavity and comes across another spacecraft, which Caleb commandeers (C1T6: Cultist Temple). He arrives at an amphitheatre adorned on all sides by clock-faces and time pieces, and takes out two final legions of Cabalists before facing the Devourer of Souls himself. Caleb takes his time and cleans the dark god's clock (CT17: Time To Kill). 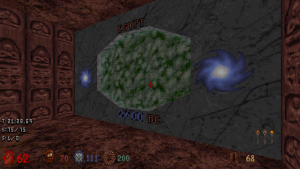 "An interesting mishmash of an episode, even if its internal consistency tends to vary greatly. Best I can figure out is that the Cabal seems to be using alien technology, presumably, to manipulate time. This is suggested from the level with the UFO, then a portal to a Cabal infiltrated ancient Egypt (somewhat reminiscent of Serious Sam: The First Encounter actually), alongside another singularity marked as leading to Medieval Europe that sadly does not go anywhere different, and finally the temporal themed boss arena. The rest of the levels have a military vibe, with the trenches and battlements of The Bunker and Citadel, and the expected mystic aura in Cultist Temple. Eclectic it certainly is, but the architectural design is largely solid. I do find the level flow often feels a bit unintuitive, and there are a number of points that seem able to trap an unwary player. Overall worth a play, just know what you are getting into."--Graham "Gideon" Wilson, Blood Wiki

"Actually I thought this was a pretty decent episode, rather innovative in a number of ways. Personally, I found it great fun to play, though it did have some occasional "bugginess". (For example, Citadel [CiT5] has a grated "dungeon" pit you can fall into, but can't get out of, despite the provision of jump boots below -- the grate placement, unfortunately, blocks access to the stack once you're below.) Other than that, I found this an enjoyably quirky set of levels, well worth the download."--Nemo

"The only episode in this mod [The Lost Episodes] with unique level concepts. You start out fighting a small war and then you go in the mansion. One mission even takes place inside a UFO. All the levels are pretty well balances in terms of difficulty so I'm pleased with this one. 3.5/5"--honestreviewer