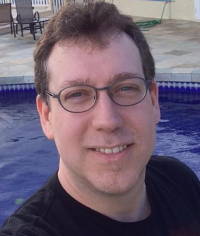 "Nick Newhard is a successful game programmer and developer with several popular titles to his credit, including Dark Sun: Shattered Lands for Strategic Simulations, Inc. (SSI) and the award-winning educational game Thinkin' Things for Edmark Corporation. He has spent six years in the game industry and ten years in the software industry overall. Nick's primary responsibilities are game design, programming, product scheduling, and team management. He also serves as Q Studios' liaison to publishers and contract team members, and plans to have a telephone and keyboard surgically attached to his body." — Q Studios website

Nicholas Christopher Newhard ("C0DEACE1") was the designer of and a programmer on Blood and its Plasma Pak expansion, and was one of the key founders of Q Studios (originally Apogee West) in November 1993; the studio merged into Monolith Productions in July 1996 prior to the game's release. He also championed the addition of competitive gameplay modes to Blood, such as capture the flag. He also wrote the original concept for Monolith's Gruntz supposedly inspired by his wife. He left Monolith Productions after Blood in October 1998, having left James Wilson III to design Blood II: The Chosen in his stead. He was thanked for the original Blood concept in the credits for Blood II. His wife Helen Newhard is listed in the special thanks section of the Blood credits.

His first computing job was at Novell in 1987 as a software engineer. His game development career began with him creating MS-DOS games and tools for Strategic Simulations from 1989 to 1992 such as Dark Sun: Shattered Lands. Following this he took up employment at Edmark Corporation, working on Thinkin' Things, where he met his Q Studios co-founders. Following his work at Monolith he worked on Spec Ops: Rangers Lead the Way under contract before moving to Crave Entertainment until July 1999, working on the role playing game Shadow Madness for the Playstation 2. After this he joined Origin Systems in September 1999 to work on Privateer Online (of Wing Commander: Privateer), but the project was later cancelled much to his disappointment. He also contracted on Microsoft Flight Simulator 2000. Nick then joined Sony Online Entertainment and designed the MMORPG game Star Wars: Galaxies, before moving to PopCap Games from July 2002 to May 2005 working on titles such as Bookworm Deluxe.

He was a design director at Secret Lair Studios, which he co-founded with Peter Freese, from August 2005 to August 2007 and created the game Carcassonne; the company was acquired by Vivendi Entertainment as Sierra Online in 2006. From August 2007 to October 2009 he was designing casual games for Big Fish Games such as Azada: Ancient Magic. He was the creative director for Playdom from November 2009 to May 2010, then a consultant for iWin and Say Design in 2010, before settling in for a year at Blade Games World to manage Jumala.com. He worked for Amazon.com from August 2011 to March 2014, which included creating IMDb Trivia and other social games such as Living Classics and Photo Agent. In 2014 he was the lead game designer for Freelance Game Design working on FitGoFun and a Unity-based sci-fi shooter prototype, before moving onto Fat Rascal Games (December 2014; worked on Poker Heroes) which was acquired by Social Gaming Network in November 2015. In January 2016 he moved to Virtually Live in the expanding field of consumer virtual reality until the Seattle studio closed in February 2017.

He has had a long and varied career in games, working on a variety of projects in many genres such as first-person shooters, puzzle/strategy, CRPG, casual games and MMORPGs. He has stated that his favourite projects (so far) have been Bookworm for PopCap, Azada: Ancient Magic for Big Fish, Star Wars Galaxies for SOE and Blood for Monolith. At the 2008 Game Design Expo he alongside others from Big Fish presented a talk on "10 Secrets to Designing Instantly Enjoyable and Addictive Games". Rain is his least favourite type of weather. His list of top PC games includes Sid Meier's Civilization, Diablo, Deus Ex, The Last Express, Doom II, Counterstrike, Maniac Mansion: Day of the Tentacle, Bioshock, Ultima Online and the Blizzard Entertainment titles World of Warcraft, Starcraft and Warcraft II. His favourite levels of Blood are E1M3: Phantom Express and E2M4: The Overlooked Hotel. 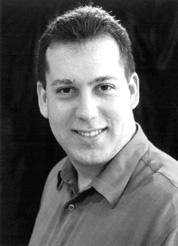