Difference between revisions of "Out for Blood"

"As I hoped I managed to construct one Episode for Blood. There are only 6 Levels but they are huge and highly detailed. Follow Caleb from his awakening in his grave into the guts of hell to defeat Tchernobog one last time."
--Tom

Out for Blood is an six level fan add-on (with one secret level) for Blood by Thomas "Tom" Ziehl.

Custom Episode: Out for Blood

Caleb blasts out of his crypt, and finds the passage beyond the graveyard to be a treacherous wooden bridge followed by a series of locks requiring him to trudge through underground caverns, mine shafts, subterranean rivers and the sewers to get the relevant keys. Finally unlocking the passage, he then has to explore a hedge maze before descending through a metal gate and the passage out (OFB01: Risen from the Grave).

He swims through further underground pools, and finally is carried out into a dense forest. He battles it out from clearing to clearing, taking out several camp-sites and cabins. Ascending up a tree trunk, he traverses from tree canopy to canopy along rickety rope bridges, before jumping down into a pool of water to get back on solid ground. Caleb blasts several passages through the dense bush, and finally comes across an artillery gun that further expedites his progress. This demolition theme is continued with several cases of dynamite strewn throughout and ultimately an in-progress rail tunnel hiding a plunger detonator wired to a series of gunpowder barrels. Beyond this cave and another sealed gate is a misty river and a solitary boat, which can be commandeered once it is unmoored from the dock (OFB02: The Forest).

Caleb sails downstream until he reaches a waterfall and pond, which hides a secret smuggling hideaway. He searches for nearby passages, and eventually safely makes it down to the dilapidated structure. At the base of the building, he finds he has to override and circumvent the steam tunnels beneath, then struggles through the cellars, spider dens and ultimately back up the cliff-side and the way forward (OFB03: Smugglers Den).

"Sorry guys, there was a major fault in one map. You couldn't finish map 5. Sorry."
--Tom 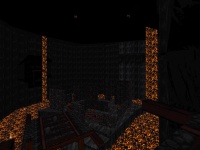 "Hi guys, thanks for the constructive criticisms. I updated my first map and I begun constructing an episode ['Toms Map Pack' is my working title]. It's gonna be a while until it's finished. In the meantime: enjoy. You have to overwrite the original tiles007.art file. No worries, I used two blank spaces for new textures. Feel free to make a backup of the original. As always: I'm happy about critique."
--Tom

An early work in progress draft from December 2, 2017.

"This is a very detailed and well crafted episode, lot's of enemies and action. Did not find the secret level but I will try to do that in the second run with another Blood port (Played it with GDX the first run). Thinking of trying how FS holds up in this. Had some FPS drops down to around 65 fps in a couple of places only but then again my PC isn't high end at all, otherwise the framerate was very stable. Very varied and fun episode, and great effects. I also had many moments where I just felt "WOW, how great does this look". I can tell you worked hard on this. This is honestly the most technically advanced addon since Deatwish. Great job, looking forward to seeing more Blood related content from you!"
--David "Tekedon" Wikström

"Truly amazing stuff. Some devious secrets there too... BTW, when coming back from the lava section of level 5, all the cultists waiting for you at the other side of the teleporter is super cheap. And the whole thing is a bit darker than it should imho, this is the very first time I move up my gamma slider a few notches up."
--Pedro Arturo Gomez "Pagb666" Blanco

"Nice detail! I like the use of the slanted floor transitions. I had to start peeking around corners after getting lit up by Cultists a dozen times."
--Dustin "Bloatoid" Twilley

<< Caleb Will Have His Revenge on Toronto | The Way of Ira >>
Retrieved from "http://blood-wiki.org/index.php?title=Out_for_Blood&oldid=45676"
Categories: