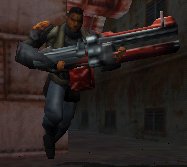 "Prophets are highly intelligent, highly trained Cultists. Their purpose is to protect the Cabal's most precious commodities. They are heavily armored and resistant to damage. Prophets represent the best the Cabal has to offer."--Blood II: The Chosen Manual

Prophets are advanced members of the Cabal that only appear in Blood II: The Chosen; they are the only Cabal type not to have a similarly named equivalent in Blood other than the Mad Scientist. They are highly trained, highly intelligent, highly armoured, and represent the best the Cabal has to offer. Typically they use a Napalm Launcher or Tesla Cannon. The Cabal uses them to protect their "precious commodities". One acts as a bodyguard to Gideon and attempts to kill Caleb twice with the Singularity Generator prototype created by the Mad Scientist, only to bring back two of the deceased Chosen - Gabriella and Ishmael. The first time Caleb encounters one in battle is on the CAS launching platform, this acts as the boss battle for the shareware version of Blood II: The Chosen.