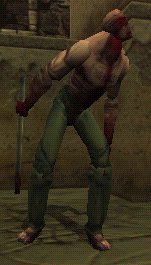 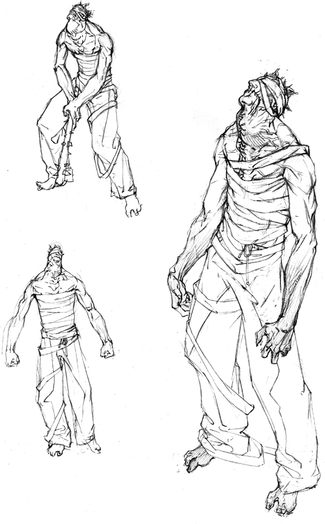 "The Soul Drudge is a human who has been infested by the Bone Leech, which burrows into the chest of a normal human, and comes to rest on the infected person's upper spinal column. From there it takes over the nervous system. This allows the Bone Leech to control all movement of the victim, although its control is awkward in the beginning, making the Soul Drudge a slow and clumsy creature. The Soul Drudge will generally attack anything that gets too close to it, most likely out of self-defense, although packs of Soul Drudges have been seen hunting prey, presumably looking for hosts for more Bone Leeches."--Blood II: The Chosen Manual

The Soul Drudge is a common enemy in Blood II: The Chosen. It is the result of a Bone Leech infecting a human, and is the first stage in metamorphosis to a Drudge Lord, then a Drudge Priest.

The Bone Leech attaches to the victim's face, asphyxiating him or her until he/she loses consciousness. The leech then burrows into the human's body and attaches to the victim's upper spinal column. This leaves the brain intact to perform involuntary actions, but allows the leech to take over all voluntary nervous functions, including movement. This process of control is difficult, making the Soul Drudge slow and clumsy. However, it can endure more damage than a human, even to the point of losing half its body. As long as the Bone Leech is intact, the body will continue to function.

The victim is still able to hear, feel, and see while infected, and is aware of everything around it. The victim also still has control of its speech center, and can emit tortured wails of pain. To alleviate this, the Soul Drudge sews its mouth shut and gouges out its eyes to make the victim more docile.

Soul Drudges attack anything that gets close to it, and can wield blunt weapons like lead pipes. They often travel in packs or along with higher-evolved Drudge creatures, searching for more hosts for Bone Leeches. Since their eyes are gouged out, they detect prey by smell or sound.

Evidence in CabalCo-owned facilities shows that the Cabal has been experimenting on Bone Leeches and Soul Drudges, possibly for incorporation into their army. Some Soul Drudges display sweaters with serial numbers, indicating they were part of a such an experiment. Nothing much comes of this, as the Soul Drudges are uncontrollable and unintelligent.