From Blood Wiki
< User:Gideon
Jump to navigationJump to search

A project to allow the easy real-time capture of models and their animations from ModelEdit into sprites from Blood II: The Chosen, and by association Shogo: MAD. 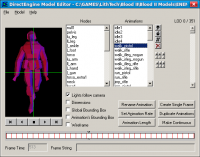 The version of ModelEdit included in the Blood II: The Chosen and Shogo: Mobile Armour Division tools from LithTech 1.0.

The version included in The Operative: No One Lives Forever tools.

The version of model edit in the tools release for KISS: Psycho Circus - The Nightmare Child. 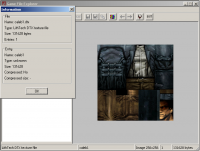 Using BlackAngel Software's DTX View as well as Game File Explorer to try and view and compare the .dtx textures.

Attempt to tweak the files using QHexEditor2 from the Fedora software repository.

Once hex edited, DTX View no longer loads the textures.

Seeking a tool called dtxutil contained in the tools for No One Lives Forever 2: A Spy in H.A.R.M.'s Way that supposedly allows for the conversion of .tga files into .dtx.

Operating theory being that the KISS textures are in a different colour mode or something that can be converted to if I can produce my own DTX files.

This was followed up on separately in the Circus of Blood project: http://forums.transfusion-game.com/viewtopic.php?f=9&t=2789