From Blood Wiki
< User:Tchernobog‎ | archive
Jump to navigationJump to search 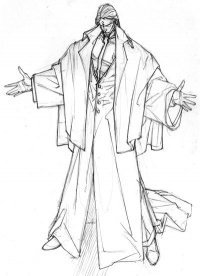 With us this week is the master of all things evil, the man who looks like a table cloth, the spawn of satan, THE... Gideon!

Welcome. Gideon, in Blood2, you were allegedly going to give a lecture on "the Ritual crime of Sin". Any chance of an extract from that particular speech?'

This was less of a lecture and more of a company memo meant to encourage employees to take part in our monthly Ritualized Sin gatherings, where we encourage our workers to get together and commit all form of Sins in the name of a closer knit inter-company spirit, which, as I'm sure you know, greatly increasing worker productivity.

On a side note, I resent being compared to Satan in your introduction. That know-nothing hack could not come close to filling my prestine robes. He's old school evil, and it's time to make room for the new!

Fair enough. You seem to be very good at running away from Caleb and his pals, persumably this ability for scarpering comes from a very physical education. Which school did you go to when you were a young scamp?

I spent my formative years in St. Marks Evil Private School, 4 years at the Evil Institute of Seattle, 2 Years of Evil Undergraduate study, and 3 years working towards my Evil PHD, which I did not get on account of problems with my thesis, "Small cute animals: A study in dismemberment". I believe that my visual aides were inadequate, a mistake that I swear I will never make again!

Hmmm, I think my dog went there. Perhaps. Seriously though Gideon, your scarpering from Caleb and co. was quite annoying thoughout Blood2. The player was so sure that he'd get a piece of meat that he kept chasing you. Why didn't you stop and face him? Are you just naturally wimpish?

Insolent dolt! But I guess it's not your fault, a small mind like yours would miss the genius of my greater plan! You look upon my actions as 'wimpish', but 'I' was the one in control. I lead Caleb around by the nose like a dog begging for a snack! Yes, I had quite a laugh watching that moron chase his carrot! If not for the inadequacies of my underlings I would have easily vanquished such an arrogant fool! But at the least, he was 'very' inconvenienced!

Uhuh. I'm sure. I bet that's what your momma told you too. Oh yeah, what's with the white robe crap? You're a cultist, not a bloody knight of the realm. Or a table cloth.

How could you possibly know such intimate details about my mother? Where did you get this information! I swear that you and your loose-lipped informant will pay with your lives! And the currency will be pain!!!

Now, on to your question. My robes are a representation of my position. I am not a mere cultist, I am "The Word", the physical representation of Tchernobog on this plane of existance, and my pure white robes represent my clarity of vision given to me by my connection to the Dark God. They also are flattering to my figure, don't you think?

That would explain it. I think that one thing that we all really enjoyed in Blood2 was the airship. However, when Caleb went aboard and downed the thing, it became obvious that you were not on board. How did you give Caleb the slip so convincingly? Or did you simply miss your flight?

Please, the Cabalco airship is a means of transport for commoners, I would not soil myself by stepping aboard such a craft.

In England (where I come from) we have this rediculous thing called the London underground, which is not, in fact, an epicenter for all things illegal, but a form of train transport. It bares a shocking resemblance to the train sections in Blood2 on occasion, even down to undead anti-heroes knifing innocent bystanders. One thing we rarely get though is a sinister, white robed, occult worshipper being chased by the human approximation of Freddy Krueger's dad. How did you get off the train dammit?

Yours is not to wonder why, only to do and die! Ok, I jumped. Scraped my knees up pretty bad, too.

In Blood2's introduction, you spoke of how your company (Cabalco) is a bit like the corpse of a diseased rat. Please explain.

Again, you fail to comprehend my greater meaning. What I stated was that we have always lurked amung you, like maggots in a diseased rat. In that metaphor, YOU and society are the diseased rat. Of course, the Cabal are maggots, which is not entirely flattering either. I've been working on sprucing that up a bit.

You must have very interesting rats where you're from.

Blood was set in Victorian times or thereabouts, and Blood2 is quite a way in the future. Why did you wait so long to try and kill Caleb and his friends?

Because I wasn't alive you fool! It took the Cabal many years to recover from the ravages of Caleb's first bloody rampage. Only the focus of an evil genius like myself could bring the Cabal to a position where we could rejoin our crusade against the Great Betrayer, Caleb.

And what made you think that that stupid dragon would help matters? He must have been blind not to kill Caleb. "Oh damn, I'm being burnt to death. I think I'll roar". I'm probably being too harsh, dragons aren't very clever. On a different note, why havn't you resurrected Tchernobog yet. That sort of leads on from the previous question, your pretty slow at getting things done aren't you?

That creature was not in my employ, but rather a product of the Ancient One's realm. I am more 'selective' of my minions.

And your Cabalco workers seriously believe that lame excuse?...

Well, I suppose. Most of them are brainwashed. Or dead.

Anyway Mr Gideon, it's been a pleasure talking with you. I hope this interview helped to shed some light on what it's really like to be a dead idiot. Not me, I mean Gideon. Damn, this crack really is having an adverse affect on my usually flamboyant mood.

Special thanks to Jay Wilson of Monolith Studios for agreeing to play the part of Gideon. He did a great job, and I really appreciate his spending some time over it. He's THE MAN.