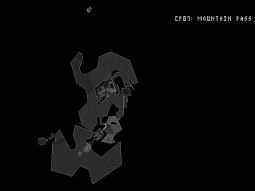 "Your journey takes you up into the legendary Carpathian Mountains. The mountains have been home to many legends and tall tales for centuries. A group of explorers headed there a year ago and have not been heard from since. An ancient riddle may have to be solved, it is said, before a soul may pass these ancient giants. Follow the path carefully, but use caution, one small misstep can be your death in this rugged treacherous place."--Cryptic Passage README.TXT

Mountain Pass (CP07) is the seventh level of Cryptic Passage, the first expansion pack for Blood, colloquially known as Episode 5. It takes place at a mountainous area. 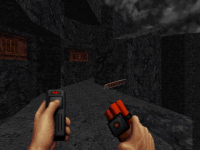 "Go up the steps, and follow the path along until you get to the Skull key door. Turn to right, jump down, and enter through the doorway in front of you. Take the path to your left into the warehouse (remember the right fork for later). Find the forklift, and get in it. Push the panel, and the forklift will back up. Use the forklift to jump up into the room. Hit the switch, and a door will open up across the way. Jump back down into the forklift, push the panel; and when the forklift gets back to the other side of the room, use it to jump up into the newly opened door. Walk around the corner, until you find a switch. Hit the switch to open the lift's doors below you, now jump down, hit the lever to call the elevator up, and enter the elevator. Hit the lever to ride it down. Follow the passage, up some stairs, and keep going until you find the teleporter. Enter it, and you'll be in a room with a crack in front of you. Grab the Eye key, and blow the crack. After the water finishes rising up, go up the steps, and into the Eye key door (it's on the left side). Jump across the chasm (better save first), and ride the lift up. Then jump across the gap in the wooden bridge, and make your way across the narrow ledge. Walk down the passage, open the stone door, and push the pillar in the next room to get the Skull key. Grab the Skull key and retrace your steps to the warehouse, and go back outside toward the Skull key door. You can't jump back up there, but if you remember the right fork I pointed out earlier, you can follow it to a teleporter that will take you to the Skull key door. Go through it, and another stone door; then jump across the chasm, and then across a gap in a wooden bridge and you'll come to the Fire key door. To your right, you'll find a narrow ledge. Carefully, follow it around, grab the Fire key, and return with it to get through the Fire key door. Follow the path around, through a couple of doors, until you get to the room with a pillar in the middle of it. It also contains three teleporters, only one of which is open. Enter it, and use the moving pillar to get across the chasm, push the pillar on the other side; and return to the teleporter. Now, another teleporter is open (it directly in front of you). Enter it, and follow the ledge around to another pillar. Push it, and some bars will raise up, and you'll have to deal with a Giant Spider. After a little bit of time, the bars will raise. When you return to where you came in, you'll find that you're way is blocked. Wait a little while (you might as well battle the Spider while you're waiting), and you'll be able to get back to the teleporter. When you get back, the third teleporter will be open (again, right in front of you). Enter it, then go down the steps, and push the pillar. Grab the Moon key, and battle the Hell hounds while you wait for the steps to rise back up. Enter the teleporter, and push the pillar. After the stairs descend, follow them down, and head outside. Walk around the structure, jump across the chasm, and step on the square. The structure will lower down, revealing another teleporter. Enter it, and go into the cave by the "Danger" sign. Jump into the water, and push the symbol to end the level."--Baytor's Guide