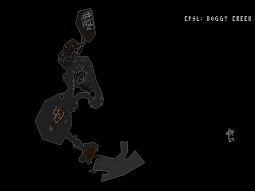 "If you are lucky, or unlucky, enough you may find your way into this ancient swamp, lost in time. It is said Death itself steers a boat through this ancient swamp in search of lost souls and unwary travellers. If you end up in this dark, dead place, make your stay here as brief as possible, or the bog's many inhabitants may make you a permanent resident."--Cryptic Passage README.TXT

Boggy Creek (CPSL) is the secret level of Cryptic Passage, the first expansion pack for Blood, colloquially known as Episode 5. It takes place in swampy marsh, encircled by a shallow river. The level also includes the ruins of a house, with a cellar that can be explored. 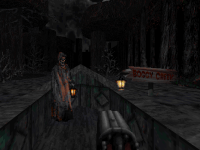 "Just as the level begins, turn around, and jump out the boat. Walk along and you'll come to a cabin. Now find the boat next to it. Now, if you like, you can take advantage of a bug in the level. Get in the boat, and face the front of it. Now jump out, and walk to wall. If you jump up, and move back and forth along the wall, you'll eventually find the spot where you jump through it. Then, all you have to do is walk forward, and push the symbol to end the level. I recommend that you don't do this, and play the level correctly. Okay, we're back at the boat. Next to the boat, and across from the cabin is a small outhouse. Enter it, and grab the Spider key. Now if you head back toward where you jumped off the first boat, you'll find a fork in the creek. Take the left passage, and look for a spot on your left where you can jump up on dry land. Now follow this along until you get to a dilapidated cabin. Enter the cabin, and find the Spider key door (it's on the first floor). Go through it and go down the stairs into the cellar. After you enter the cellar, the door will close behind you. A bit of a problem. Now look around for the Skull key, but don't grab it yet. To the left of the key (this is facing it) is a column with a switch on the other side of it. Hit the switch to open the door. Now grab the key, and run back to the door to avoid fighting the Giant Spider. Now all you need to do is fight your way back to the first cabin. Behind the boat are a couple of columns. On one of them is a switch that requires the Skull key. Now that you have it, push the switch, and a section of the swamp will open up in front of you. Now all you need to do is walk forward, and push the symbol to end the level."--Baytor's Guide

There are no secrets for this level.