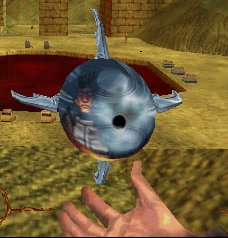 "The Cabal's nasty take on the In-the-Egg-Scrambler seeks out enemy skulls and drills straight to their deepest thoughts. Accuracy isn't all important since the Orb detects motion and can even give chase if enemies see it coming. The alt fire gives a whole new meaning to the phrase 'Be the ball.' Switch in to Orb's-eye view to hunt down your enemies personally. Just remember that your own carcass sits vulnerable where you left it, so don't be surprised if you're dead when you get back."--Blood II: The Chosen Manual

The Orb is a magic weapon found only in Blood II: The Chosen, clearly inspired by the Sentinel Spheres of the Phantasm movie series. It is a small metal ball with protruding razor blades. The Orb works by flying out and attaching to a victim's head. It then bores into the skull. It does not need to be terribly accurate, but does not cause great damage. It especially ineffective on enemies like the Behemoth, and is mostly meant for stealth and surprise attacks. This is Ishmael's signature weapon.

The instruction manual states that this is a Cabal invention, and describes it as an "inside-the-egg scrambler". The alternate fire takes 200 Focus, which Caleb does not have. Many players would not know that the Orb had a functioning alt-fire unless they played the single player campaign as Ishmael or Ophelia, BloodBath or in The Nightmare Levels. Certain third party modifications, such as Extra Crispy, increase Caleb's Focus high enough that he can use the weapons alternative fire.

AMMO TYPE: None (Focus)
REGULAR FIRE: The orb flies out and attaches to a victim's head, causing damage until it explodes
ALTERNATE FIRE: Switches to an "orb's-eye-view", where the player can control its movement, seeking and attacking victims anywhere on the level. This also leaves the player vulnerable.