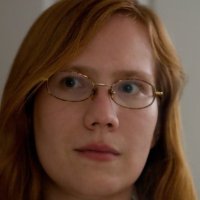 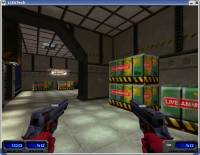 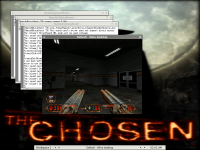 Blood II on GNU/Linux through WINE

"During my time at Monolith I was a developer on the LithTech engine, with a focus primarily on the API used to actually provide game logic. I also provided a variety of small reusable code for both third-party and in-house games, such as code to calculate the light spilling through an opening door, or to provide animated video on in-game billboards. I also functioned as a liaison to third-party licensees, preparing documentation and tutorials on using the engine, and answering advanced-use questions." — Linkedin

Rachel 'Loki' Blackman (formerly Jeremy Blackman) was a Monolith Productions employee who worked on Blood II: The Chosen and Shogo: Mobile Armour Division; she worked on games for Monolith from Claw (1997) to No One Lives Forever (2000), then known as Rachel. She was notable as being one of the few people who has given information about the possibility of the plot behind a potential "Shogo 2". Despite having been on the Blood II team, she was regarded as the most invested otaku at the company, and therefore a primary person consulted by the designers of Shogo, as stated in an article she wrote for the Anime 101 section at Planet Shogo.

Much like the works of such people as Dave D. Taylor, Zoid Kirsch, Ryan "Ridah" Feltrin, and Timothee "TTimo" Besset at other companies, she attempted to make Monolith a GNU/Linux friendly game company. In November 1998, soon after the release of Blood II, she posted in her plan file about her intent to port LithTech. She continued working on this project for several months, as can be followed on websites which archive her plan or from the Blues News archives.

"I finally got the ok to go ahead with putting together a Linux version of Lithtech and the LT games, beginning first with creating a server. Sometime in the near future, I'll be trying to put together a team to handle the Linux port - stay tuned for more info! I'm also open to porting to Solaris and other UNIX boxen; the port will be as clean as possible so as to work on as many architectures as possible." — .plan file

Although in the end she never released even the promised GNU/Linux server, Hyperion Entertainment later acquired the porting rights from Monolith and made ports of Shogo to GNU/Linux, Mac OS X, and AmigaOS. Unfortunately Blood II was never ported to any of those platforms and remains a Windows only application; Hyperion originally also intended to bring over No One Lives Forever. In 1999 there also was an announced effort to port the game to BeOS by Be Inc.

LithTech also remained a heavily DirectX-based engine without OpenGL support, which has discouraged its use on other platforms and limited its play-ability through emulators or compatibility libraries such as Wine. According to software contractor Frank C. Earl circa 2008, "no Lithtech engine games are practical [to port to GNU/Linux] right at the moment...", but this seemed more to do with business politics rather than technology. However, Monolith's latest game Middle-earth: Shadow of Mordor has receive a 2015 release for GNU/Linux by Feral Interactive, the first LithTech game released on that platform since Shogo.

For a guide on running Blood II from GNU/Linux click here, and for a guide to getting the Shogo version for GNU/Linux running click here.

As could be hinted from his GNU/Linux background, she was also a free software enthusiast and was the author of the free software Listar mailing list server tool. She was also slightly active on the Cygwin mailing list back in 1997 and on anime fan sites. A two-part fan fiction piece called "Taaveren", a cross-over between Ranma and Wheel of Time was co-written by John Biles and Blackman. The work won TASS Awards Award for Annual 1995, 15th place, tied with another entry. She was supportive of the possibilities of Shogo fan fiction, mentioning that some could even become part of the official canon. Sadly, Shogo fan fiction was limited for the most part until The Expanded Canon was launched in 2008.

It should be noted that her nickname has caused some confusion given that Loki Software was a firm that also brought games to GNU/Linux, leading some to think that they were the ones working on the LithTech port.

"no, the 'Loki Entertainment' that wants to do Linux ports of commercial games is NOT, despite what people might think, connected to me in any way whatsoever. I'll probably have trouble convincing people of that since I have a reputation as a die-hard Linux supporter, but I swear it's true." — Rachel Blackman, December 10, 1998