Not long after the last Blood Wiki anniversary, I had the good fortune of discovering at the local dump an old Intel Pentium III 500 Katmai based computer that had been left to be recycled. Loading it into the truck when nobody was looking, it did not take much work to get it up and running again, and with the addition of an ATI Rage 128 Pro graphics card imported for cheap from Russia I suddenly had a close to period accurate machine for playing Blood II and Shogo from Windows 98 Second Edition circa 1999. The computer handles LithTech just fine at high settings, although it does not even come close to pushing the framerate consistently past 60 FPS as we are spoiled by today. Those interested can read my articles for GamingOnLinux where I document my efforts to also turn the computer into a retro Linux gaming machine ultimately running Red Hat Linux 7.3 Valhalla.

The computer plays the original Blood okay as well, although the performance does not exceed what I can now manage with DOSBox Staging on a modern computer. Ten years or so ago it would have been a bigger deal, but I still decided I would give the retail shareware a try, since I do have access to it on CD-ROM. I knew there would be differences from the registered version, but I had been completely unaware that the shareware disc shipped with a different version of the opening cutscene with a chattier Jace Hall monologue. Cultists also sound much more like they do in The Nightmare Levels with less audio manipulation, and all slain enemies will play their death animations just like they do in Blood II upon loading a saved game. Caleb's wail upon discovering Ophelia's corpse has an echo effect, and Cheogh just makes Gargoyle noises.

Did they remove the Duke Nukem 3D like holster key in the registered version? Also, does Caleb say "yahoo" in the registered version of Dark Carnival? I cannot even remember. One novel aspect of playing the game on genuine '90s hardware was hearing the MIDI soundtrack played on an old Creative Sound Blaster 16 sound card through a genuine 16-bit ISA bus, not that I would call it my favourite rendition of the music apart from its playback of cblood7.mid which does rock. This is fortunate as the CD audio refused to work, even though it is included on the disc along with the first two cutscenes and even the compressed music video for "Love You To Death", which runs just fine in Windows Media Player 6.4 on a 500 MHz Pentium III.

As for my work on the Blood Wiki, my time in the last year was mostly spent on administration, clearing spam and upgrading the video extension. The farm takes up most of the day, but rest assured as long as I breathe the Wiki will be maintained. After all, the time has come for the world to understand the true nature of sacrifice! Tchernobog (talk) 20:29, 12 January 2022 (EST)

Well, last year I remarked that I had not played that much Blood in 2020, but that thankfully did not continue into 2021. I have completed descriptions for Trauma Therapy, the second chapter of The Way of Ira and finally returned to finish French Meat 2. Speaking of coming back to things, I went and completed writing out the development history of Shogo that I started back in 2016 when I did it for Blood II. The article still needs a little work, with throughlines written for the developer quotes, a description of the dev updates still needed, as well as more images to illustrate things, but at least it is now filled out and live.

Meanwhile the retro shooter renaissance continues yet unabated, with Blood influence admitted by the developer of Dread Templar, despite his initial aversion to it, and of course the obvious homage seen in the upcoming Cultic. As a matter of fact, I got into the Blood reference game myself with my April 2021 LibreJam entry Hedged, and arguably also tipped a nod to Blood II with my August entry Bring Them On. On the "official" front however, Fresh Supply sadly continues to wither on the vine, left unloved by Atari much like its predecessor GT Interactive abandoned the series before it. Instead, as always, the community keeps the flame alive via our life essence. Oh, all this and I still played more Doom WADs... Gideon (talk) 20:23, 12 January 2022 (EST) 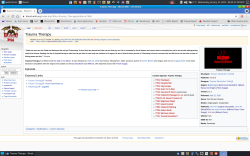 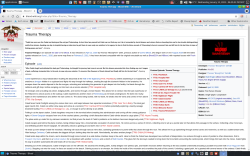