Difference between revisions of "Blood:6th Anniversary"

Another year goes by, and the Blood Wiki continues moving forwards just as it has ever done. The biggest change over the past year with regards to the Wiki was our decision to remove unverified account creation, something I took no pleasure in doing but was made necessary due to the increasingly prevalent problem of spam bot accounts and their associated vandalous actions. I am pleased to report however that our effort to curb those actions has been for the most part successful - since removing the ability for guests to create their own accounts my workload has been greatly decreased, and I have still been able successfully welcome at least one new user into the fold through the proper use of our new account creation policy. It was a hard decision but in the end it was the right one; if anyone is reading this and is still unfamiliar the new procedure for joining our team, please read about it in full here.

This past year also saw a greater interest in the Blood rights than has been shown in years. Both Jason Hall and Devolver Digital looked into bringing the game back in some form, and while neither were successful in their attempts, with Atari either rebuffing their attempts or asking for such a ludicrously high price to make any such attempt financially prudent, it does at least demonstrate that interest is still alive in Blood and we are not alone in our continued devotion to the franchise. As far as the fan community is concerned, it has been an admittedly quiet year but with still a few rather notable highlights; the one I enjoyed the most was the large Halloween Bloodbath organized by Joe Volante to celebrate the 10 year anniversary of the release of Blood II: The Chosen. It was great to finally be able to play the game online, and see so many old and new players show up throughout the course of the night.

Hopefully the new year will bring even more news on the rights front, and we will see more out of the fan community again. I myself am planning to get more involved in a part of fandom I was once quite active in previously, once I get a few other outstanding items resolved. I can also say that, while not actually directly Blood related, I do know of some good news that is still forthcoming for classic Monolith game fans, although for the moment I can not speak of it directly either.

Regardless, I am hopeful for a positive new year at this point going forward. Tchernobog 17:24, 12 January 2014 (CST) 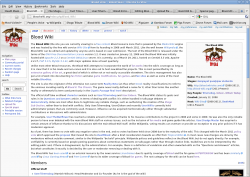 Below is a list of contributions by user up to January 12, 2013, sorted from greatest to least. This is a rough number however, since it includes edits to talk and user pages as well as submissions to articles. Also, Gideon and Tchernobog have used each other's accounts on occasion depending on which computer they were using at the time. This also includes edits from 2008, 2009, 2010, 2011 and 2012 and contributors who have not made an edit in the past year.