"[Blood is] the most original, funny (and also the most sick) old-school FPS game of all time. Although this [project] is not (and never will be) a remake of the whole game by any means, it contains many references and other related stuff that will fill with joy any true fan's heart... even if there's an absence of story in the mod. Personally, I think this mod is mostly intended for players of original Blood (and it's two addons Plasma Pak and Cryptic Passage) who will recognize/appreciate used content in the mod."
--Andrej "Andyno" Nagy

Blood: Refilled (or simply BloodMod) is a combat/survival modification for the 2010 video game Fallout: New Vegas, and also contains minor adventure elements for "all those who rather fight for life and enjoy searching the surrounding area for useful loot instead of solving overwhelming puzzles". The game is a homage to the video game Blood. A tally of votes on the website, show a vast majority approve of the mod. 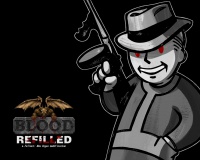