Difference between revisions of "BloodBath" 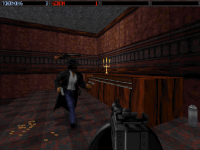 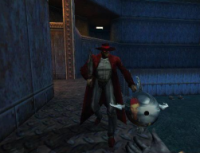 "Splatter your friends with blood... on more On-Line gaming services than ever before (that is)!"
--Blood Manual

BloodBath is the name for the multiplayer mode in both Blood and Blood II: The Chosen, conventionally called "Deathmatch". The developers changed the name to better reflect the game's title. The goal of this mode is to kill each player while avoiding death yourself. Play takes place on a closed map with various power-ups, weapons, and strategic cover. Multiplayers connect through either a serial connection or a LAN server.

In Blood, each player assumes the role of Caleb (wearing different colour pants to differentiate between players), but in Blood II the player can choose one of the four Chosen to control. It also allowed character customizations, allowing the player to increase ammo capacity, Focus, speed, etc. The Nightmare Levels added enemy models as options. It also added new modes such as "Zombie Head Soccer".

Another unique feature of BloodBath is The VoiceTM. It has the same voice (and voice actor) as Tchernobog and serves as the announcer for BloodBath. Each time a player dies, The Voice announces it with a descriptive verb, such as "annihilated", or "sterilized". A list of quotes can be found here.

The original Blood features a handicapping system coded by Peter Freese that is accessible by launching with the -Skill n parameter.

The fan-made remake of Blood titled as Transfusion has a working BloodBath mode. Transfusion comes with a Caleb character model but also allows you to download others online. The game can also support computer-controlled opponents called "Frikbots".

Both the fan made Blood TC and ZBlood maps can be played with both engines' Deathmatch mode with Blood enemies and items.

Bloodites have also made fan made Blood related files to be used in the game Quake III Arena such as Q3 BloodBath.

Semi-annually since 2013, members of the Transfusion Forums have held an annual Halloween BloodBath within Blood II: The Chosen.