Article discussing the future potential of the Blood series. 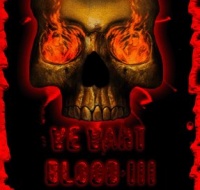 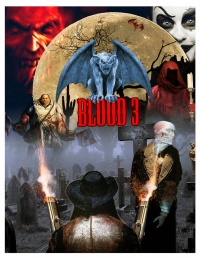 Blood III (or Blood 3) is a speculative game in the Blood series that would be the sequel to Blood II: The Chosen (more specifically set after the The Nightmare Levels expansion pack).

Many have asked for Monolith Productions, the original developers of the series, over the years to create the game and there has been some recorded hints of interest from within the company at various points; however, no real advancement on the project has ever been shown.

Some major factors that have prohibited a Blood III are the mainstream commercial failure of Blood II: The Chosen and that the rights to the Blood series eventually became split between GT Interactive's successor Atari and Monolith Productions' parent Warner Brothers, thus making the game a potential legal problem. The vast majority of people who worked on the games have also long departed from Monolith, with even long time designer Craig Hubbard leaving in 2013.

"Plain and simple, I will not do another Blood game unless the concept is worth doing. I have too many other game ideas I am in love with to do Blood simply for the sake of doing it. Another designer at Monolith could easily pick up the series from me just like I picked it up from Nick. I will say, though, some concepts for Blood 3 are sitting on my hard drive at work, but it is a very different animal than the first two games. I also have an idea for another, non-first-person shooter title in the Blood world."--James Wilson III, May 1998

"Currently there is no Blood 3 in production, and no plans to start one up, so no, I won't be working on it. If we were to make a Blood 3 I doubt I'd be on it. After 2 full Blood products and 2 add-ons I think Blood is done with me."--James Wilson III, January 1999

"Monolith Studios has not been idle since the release of its latest two first-person shooters, Shogo and Blood II. Speaking with a fan site, the company detailed some of its future plans for the Blood franchise. A patch for Blood II is still being worked on, primarily aimed at addressing the multiplayer issues, the patch will also address some single player issues. Gamers can look for it in about a week. Meanwhile work progresses apace on the Blood 2 expansion pack. Expected to ship in February, Monolith is still working on this project and hopes to have it in beta within two to three weeks. And in the same interview with fan site Planet Blood, Monolith programmer Brian Goble mentioned that he was working on not only Blood 2 projects but also some stuff for Blood 3, indicating that Monolith has at least begun some preliminary work on a potential sequel. "--Monoliths Wants More Blood, January 8, 1999 - IGN

"Monolith currently has no plans to revive the Blood franchise, but you never know what could happen in the future!"--Monolith Productions, March 2007

"As much as I would love to play (or develop) another chapter of Blood, it's unlikely that there will be a Blood 3. Not to be too philosophical, but whatever fates crossed or stars aligned that allowed our little team to craft Blood have long since moved on. Each of us has gone our separate ways to make good and even great games."--Nick Newhard, April 2008

"Folks have written to me before re a Blood 3. I don't have any info for you. Couple years ago, I passed on requests to Monolith but now that they're owned by Warner Bros in L.A., I don't know who makes decisions. I'm just an actor; i.e., no clout, nothing! Below is company info. Don't send e-mail, CALL them and ask to speak to some producer or something; not just the receptionist. Maybe they'd give you some info. I can't. Too bad, could use the work!"--Stephan Weyte, May 2010

"Despite the bittersweet regret for all the things we didn't manage to get into [the original Blood], I'm definitely proud of the game. And if anyone wants to fund Blood 3, then count me in!"--Peter Freese, 2014

"We love all those games [Shogo, Blood and F.E.A.R.]. There are still many original developers here from those days. But...we are moving forward into new horizons of player-driven storytelling. That's really where our collective hearts lie at the moment. Maybe someday we'll come home to these haunted shores. (Haunted at least for FEAR and Condemend.) But not in the short-term."--Monolith Productions, September 21, 2018 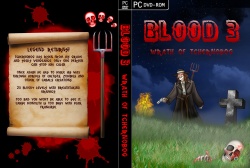 "After Caleb destroyed Tchernobog, The One That Binds, at the end of Blood he returned to Earth with the goal of taking control of the Cabal as their leader, a position he feels is rightfully his. The Cabal consider Caleb and the other Chosen to be betrayers of the cause, and so wanted nothing but Caleb's death. This, of course, spurned a constant conflict between Caleb and the Cabal that has lasted 100 years, with Caleb unable to take over the Cabal by himself, and the Cabal failing in its efforts to destroy Caleb. During this 100 years Caleb quickly realizes that he can't take over the Cabal by himself, so sets about finding a way to bring back the other 3 Chosen to help him... The Chosen then form a shaky alliance and agree to go after the Cabal."--James Wilson III, February 1998

The Blood community continues to keep the idea of a Blood III alive and continually debate its possibilities or what they would wish it to be like. It has not been uncommon on Blood community forums to hear rumours about a new sequel to Blood or any sort of modern official Blood project. There was a Steam Group created to help promote the concept of a Blood III, using the picture above, called "We Want Blood III!".

Plot-wise, many think that Blood III would likely follow along the common hints of the Blood II: The Chosen back-story (as well as the stated plot of the cancelled Blood II: Revelations) about Caleb and the Chosen's wish for world conquest, possibly by taking control of the Cabal and Caleb officially ascending as the seventeenth incarnation of Tchernobog, or maybe even by the Chosen creating their own army. If made by Monolith, it would presumably be done using a more modern version of LithTech, such as "Juptier EX", and as such would resemble the F.E.A.R. series or the more recent Middle-earth: Shadow of Mordor technologically. 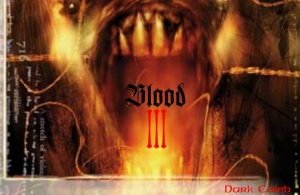 Some people have also suggested making a fan made sequel to Blood II: The Chosen (particularly noting the idea of a game "made by the fans for the fans"), however no such project has achieved any great accomplishment. The Blood Wiki founders themselves played around with some ideas upon this basis with User:Drudge Master in early 2008 for example under the title of Blood III: The Reckoning, which is not to be confused for the actually prototyped project by Caleb88.

Some fan works are set after the events of Blood II: The Chosen such as the fan comic Tales of Blood: Everyday Life, the fan fiction pieces The Chosen in the Haunted Mansion, How Much Time Has Passed, and The Chosen Versus the Mad Scientists.

The fan fiction More Blood in the Arena Eternal and the fan comic Caleb versus Lobo have also been suggested as being set after Blood II: The Chosen. There are also some fan artwork, made by Dark Caleb and +DeaD+ that show a desire to promote the idea of a Blood III; as well as the box art image by MechanicalFirefly. At this time, no released fan games have been made set after the events of Blood II.

"Hi. I'm Stephan Weyte who voiced 'Caleb' in Blood I&II. I've heard you guys might be trying to re-up the Blood franchise. Good luck! If so, please give me a thought, eh?"--Stephan Weyte on Devolver Digital

Independent of creating a further addition to the Blood series, some groups have also tried to acquire the Blood rights for other purposes, most notably Jason Hall who publicly announced that he wanted to make a remake of the original game in August 2012 after musing upon the concept for several years. Devolver Digital also looked into what would have been involved in purchasing the Blood rights a year later in 2013, following the successful release of their published remake of Shadow Warrior by Flying Wild Hog. Neither group was successful in their attempts, however, with Hall unable to solicit Atari's backing and Devolver complaining of an exorbitant licensing price.

Interceptor Entertainment, who developed the 2013 remake of Rise of the Triad and the attempted Duke Nukem 3D: Reloaded, have also stated that they would be quite interested in developing a similar effort for Blood should the rights ever land their way.

"We would love to do a Blood remake. If you can buy us the license, we’re willing to chew through it [laughs]. Unfortunately, Blood has nothing to do with 3D Realms or Gearbox or Interceptor. That is in the land with Jace Hall and Warner Bros and a lot of other people. That’s pretty publicly known. But yeah, Blood is one of our most beloved franchises ever. If we were to get the chance to do a remake, we would grab that chance immediately. We would drop everything else and do a Blood game if we got the chance to."--Frederik Schreiber, March 4, 2014

Samuel "Kaiser" Villarreal, developer of the various Kex Engine ports and employee of Night Dive Studios, also mused upon working on an updated version of Blood. Night Dive had also previously looked into reviving Monolith's No One Lives Forever, among many other classic titles such as the System Shock series.

"I am not sure if there’s any other shooters I plan on remaking. I’ve been tempted to look into Blood but I am quite wary of the many toes that I could potentially be stepping on. Particularly Atari’s toes."--Samuel "Kaiser" Villarreal, May 4, 2015

Stephen Kick, founder and CEO of Night Dive, later elaborated further on this ambition in an 2016 interview.

"Duke Nukem and Shadow Warrior are phenomenal Build Engine games but I think you could argue that Blood was the best. So it’s strange that it would be the last game to get a proper remaster. The rights situation is muddy but it’s definitely on Night Dive’s wishlist – I imagine that if we ever did get the opportunity Blood would get a lot of love from our team. A new entry in the series would be an exciting project, I know Jace Hall has expressed interest in making a new Blood and having some of the original Monolith crew involved would be even more exciting.."--Stephen Kick, April 16, 2016

He had previously mentioned similar on the GOG.com live stream via Twitch.tv on September 23, 2015. This has since culminated into Blood: Fresh Supply on May 9, 2019 following a license deal with Atari announced on December 7, 2018; Atari retains distribution rights to Blood, including updated versions, but the intellectual property belongs to Warner Brothers.

Regardless of the formal legal situation, various attempts at non-commercial fan remakes have also been attempted on various engines, most notably Transfusion, ZBlood and BloodCM. In May 2017 a reverse engineered source port was released by Alexander "M210" Makarov (creator of BloodCM) under the title of BloodGDX, the first such effort to reach a stable state. This was joined by NBlood, a port based on EDuke32, on February 12, 2019; this was also later forked by the Raze project first unveiled on February 4, 2020.

Aside from the wrapped versions put out by gog.com (which contain fixes like the post-Windows 9x music patch and no CD check), compatibility layers such as dgVoodoo 2, DxWrapper and WINE have helped keep Blood II operable on modern systems; including non-Microsoft ones. Many have expressed hopes that Blood II might also receive a Kex Engine remaster from NightDive someday should Atari green-light such a project, or at least receive a community patch in a manner similar to Daikatana version 1.3.