Difference between revisions of "Blood Reborn" 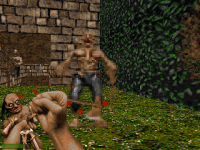 Often to proceed through the level you have to pick up a new weapon and abandon an old one. The Flare Gun does have the ability to light people on fire, and the Voodoo Doll retains the property of hurting the player when not aimed at an enemy. Though the accuracy of weapons is somewhat worse than in Blood, sometimes when the cross-hair is on an enemy it still won't count as a hit. This causes problems when using the Voodoo Doll, as you have less health in this game than in Blood.

The game was in part developed to allow better Blood-like play on Windows XP, Windows Vista, and Windows 7. The developer does however promote the use of Dosbox to run Blood on these systems, as well as playing ZBlood. The Blood Reborn website also had the full version of Blood available for download but, as with all abandonware, the legality of this was questionable. The site promised that it would be taken down say Blood be made available for purchase again by Monolith Productions, and so it was after the game was made available legally from Good Old Games. Later it just had a purchasing link as well as the shareware version for download.