"Pretty much the only Blood information website around since the fall of PlanetBlood. I find this Blood Wiki an essential for any Blood Fan. It is so essential i even have a desktop shortcut for it! This wiki is stuffed full of interesting and useful information, and I always come back to check on the Blood News (how I found out about gog.com). This is pretty much just like any other wiki as in you can just drop in information and go which i tend to do from time to time. Extras for this wiki is the large fan base such as fanfiction, artwork, and ect. I definitely recommend this."--User:TeenBeach, September 3, 2010

The Blood Wiki (the site you are currently viewing) is a free content Blood resource site that is powered by the Media Wiki engine and was hosted by the free wiki service Wiki-Site from its founding in January 2008 until March 2011. Like the well known Wikipedia, the Blood Wiki can be edited and updated by anyone and is based on user submission. The text of the Blood Wiki is released under the terms of the GNU Free Documentation License version 1.2.

"Thanks to its founders, Tchernobog and Gideon, the Blood Wiki has been the definitive home for fans from the Elderest of Days. Long may it endure, undying through the aeons!"--"Monolith Productions

The Blood Wiki also hosts a sub-section to act as a wiki documentation for Shogo: Mobile Armour Division. The game is powered by the original version of LithTech and in that way and others, it is the sister game of Blood II: The Chosen. The sub-section was founded on June 8, 2008 after some time in consideration. Its creation was the result of a successful policy motion and vote and it is principally written and maintained by User:Gideon. It is grown more useful of late because of its attempts to preserve Planet Shogo content after that website was taken down in the early summer of 2009, and has continued this role with the demise of ShogoMAD.com and Haus of Shogo, alongside Shogo Tribute. Like its mother wiki, the sub-section has a special article that documents the game's fan community and works, as well as one for mods, and also has a special hosting place for fan artwork. The site is also part of of the New Shogo Web Ring.

These policies and the overall organizational structure of the wiki have been carried over to the Pie in the Sky (about Pie in the Sky Software) and Catacomb Wiki (based on Catacomb 3D and related) sites also founded by User:Gideon over on the Miraheze hosting service. The Blood Wiki also maintains a Wiki Index of similar wikis covering related topics.

The Blood Wiki has been used as an external resource by the news service LinuxGames due its quality coverage of Blood and the fan game HYPERTENSION and has been similarly used by Linux Gaming News and Free Gamer due to its wider coverage of Blood fan games. It was quoted by GOG.com when the Blood series was put under its mod spotlight. The wiki has also been quoted by or referenced from by Blood Thirsters, Bloodline and Blood Hispano. As quoted up top, the wiki has also been acknowledged repeatedly by Monolith Productions via its social media accounts. 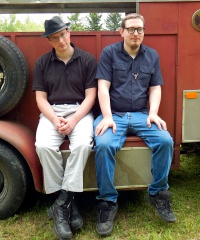