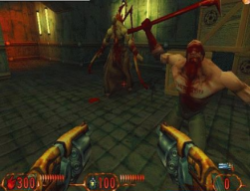 C1L5: Steam Tunnels is the fifth level in the game Blood II: The Chosen (map name: 04_steamtunnels). It resembles an underground sewer system and steam tunnels.

Man, do you hate sewers! The smell is rather appealing, but all-in-all slogging through the Floaters gets old. When you finally get around to ruling the world, it'll be time to declare the place a no-sanitation zone. The perks of an open-sewer society include not having to budget for pipe repairs. The stuff can find its way to the oceans on its own. Either way, even with the local fragrance, you can smell Gideon's nasty stench. The coward's probably headed for a Cabal safehouse.

"Directly under your starting position are a number of Life Essences. Grab 'em if you need 'em. Directly to the right of your starting position is a door. Go through it, up the steps, and activate the wooden lever. Gib the stabbed body behind you for a MAC-10. Slash your way through the crates, and look down the hole. Carefully jump down to the ledge, and then down to the floor. Follow the passage down until you get to a room with a large cylinder. Follow the path around it into the "sewer access" door. Smash the boards barring the storage room, and enter it. Under one of the tables is some IR goggles (easy to miss), and you smash the bookcases for some items. Jump through the hole in the wall, and smash the metal shelves to get into the next room. Go through the door, and smash the small window to your left. Walk through it to get the "Valve Access" room. Take anyone of the lifts down, and find the dials to turn off the steam. #1 and #3 are on a lower level than #2, and there's a ladder linking them. After you shut off all three, ride the lift back up. Walk back through the window I told you to smash earlier, and keep walking straight ahead until you get to the room with steam blowing on the door. Over to your left is the wooden lever that turns it off. Do so, and go through the door. Side Trip: Across the way is a door marked 'Maintenance', go through it, and duck under the pipes over to your left. Follow it around, and you'll find yourself in the infamous Predator room. Pick up the items, and leave the Maintenance room. In between the 'Valve Access' door and the 'Maintenance' door is a path flanked by steam valves (thankfully, they're off now). Go down the path, and through a door. There are two paths you can follow, but you need to head over to your left first. You'll soon find yourself in a room with a metal cage and three wooden levers. Activate them all, and retrace your steps. This time take the stairs on the right side of the room. Ride the lift down to 'Valve 4', and follow the path along until you get to the room with the big pipe over some raw sewage. Take the path on your left (the right side leads to bum's home, a curiosity, but absolutely useless), and enter the door at the end of the path. You'll see the elevator to the CDM here, so enter it to end the level."--Baytor's Guide

The last is a reference to a famous line from the classic Universal Pictures film Dracula, a founder for their Universal Monsters series.