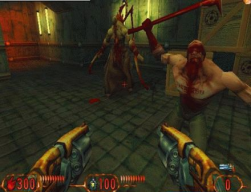 C1L5: Steam Tunnels is the fifth level in the game Blood II: The Chosen (map name: 04_steamtunnels). It resembles an underground sewer system and steam tunnels.

Man, do you hate sewers! The smell is rather appealing, but all-in-all slogging through the Floaters gets old. When you finally get around to ruling the world, it'll be time to declare the place a no-sanitation zone. The perks of an open-sewer society include not having to budget for pipe repairs. The stuff can find its way to the oceans on its own. Either way, even with the local fragrance, you can smell Gideon's nasty stench. The coward's probably headed for a Cabal safehouse.

The last is a reference to a famous line from the classic Universal Pictures film Dracula, a founder for their Universal Monsters series.