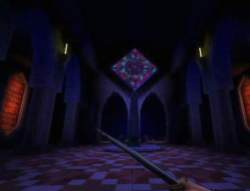 C3L3: Temple of Poon is the twenty-third level in the game Blood II: The Chosen, and the third level of the third chapter (map name: 18_temple). Caleb finds Ophelia in a temple underneath Cabalco Headquarters. Gideon whisks her away, and Caleb must fight to ascend the building to Gideon's office.

You've reached Cabalco's top-secret High Temple. We're not here at the moment, but please feel free to give blood, preferably human or goat, at the door. If this is an emergency, please light 69 white candles, scratch a large pentagram into the concrete floor with your fingernails, and dance, skyclad within it, after painting yourself with the blood of your torn and stumpy fingers while chanting to our dark god. An insidious servant of the Underworld will be with you shortly. Thank you for your patience!

"Warning: There are Thieves all over the place, so be careful. After defeating the Death Shroud, jump into the water in the altar. Pick up the Necroward and the Life Seed and jump back out. Exit through the door and make you way around to the stairs. Climb down them and walk around (enter one of the two large wooden doors to pick up the Life Leech) and go up the stairs. Walk forward until you get to a fork in the passage. You can pick some Howitzer shells up to your left, then take the passage to your right. Cross the bridge, and after it collapses on you, jump up into the cave. Find the lift and ride it up. Follow the passage around (smashing the boxes as you go) to another lift. Ride it up to end the level."--Baytor's Guide

Caleb enters the temple, where he finds Ophelia tied to an obelisk.

CALEB: Mm, I've been dreaming of you all tied up like that.
OPHELIA: Mmm, Prince Charming, I presume.
CALEB: Gimme some sugar baby.
OPHELIA: Cut me loose, and I'll give you a whole cherry pie.

GIDEON: I thought you might come here.
CALEB: Oh, you again. How 'bout coming back in about two minutes.
GIDEON: Sorry to break up this lovely reunion, betrayer, but I need to keep you… motivated.


A rift opens in front of Ophelia, where she vanishes. Gideon disappears as well.