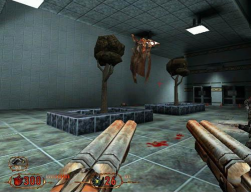 C3L4: Cabalco Enterprises is the twenty-fourth level in the game Blood II: The Chosen, and the fourth level of the third chapter (map name: 19_lobby). Caleb enters the lobby of the Cabalco office building, but has to cut the power in order to proceed to the roof.

Welcome to Checkpoint Gnarly. Ha. The security around here looks a little overly... fanatical. There's got to be an alternate entrance to the Cabalco HQ. In the meantime, it might be wise to do a bit of cleansing, and take down some unworthy opponents. Sometimes you have to make a bit of a mess to get a place clean. You're just glad that you don't have to get those gray-matter stains off of the walls. Those have to be a serious drag when they've had time to dry. Time to make your own 'unlimited-access' pass.