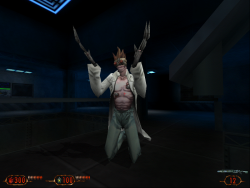 C3L7: Research and Development is the twenty-seventh level in the game Blood II: The Chosen, and the seventh level of the third chapter (map name: 21_laboratory). It represents the science division of CabalCo Enterprises, and includes torture implements, and aquariums holding Shikari (many of which are broken). It also holds the Singularity Generator, the BFG of the game, and the final "confrontation" with the Mad Scientist.

Level 7: Research and Development
THE LURE OF RESEARCH AND DISMEMBERMENT

Ah, science! You fondly remember the first time you got to dissect something. You were all aquiver with excitement as you began to flay the skin off the fetid corpse. The muscle tissues danced when you applied just the tiniest bit of voltage, and boy were you surprised when you opened the bowels by accident! What a gas! Well, enough daydreaming... time to get to it and find the entrance to Cabalco's R&D.

"Follow the hall to your right and jump down into the Shikari pit. You'll find a IntraAccess keycard down here. Get it and climb back out. Now go back the way you came, until you get to a door. Go through it and you'll find a palm print panel in this room. If you activate it, you'll open a door to the Shikari pit where there's a Life Seed. Activate it if you willing to cross paths with the Shikaris. Find the lift in the corner of the room and ride it down , and follow the hall to your right (enter the Shikari pit to get the Life Seed if you activated the panel). When you turn the corner, turn around and look up. You'll see a short ladder. Jump up and climb it. Follow the duct around (you'll need to jump at one point) until you find a grille. Smash it, and drop down into a lab. Grab the Status9 keycard, and activate the panel to lower the forcefield. Go through the door and follow the hall to your right (across from you, you'll find a couple of labs where you can pick up a ward and a couple of Life Essences), and go through the door at the end of the hall. Follow the hall to your left, and you'll enter the Asylum (feel free to terrorize the patients, you'll find some items in their rooms). Go to the end of the hall and through the door. To your left if the Sector9 keycard, grab it and make your way back through the Asylum. On the other side of the Asylum, follow the hall to your left. Enter the first door on your left and drop down into the hole to your right. Make your way through the sewer to a ladder (be careful of the Bone Leeches on the way). Climb the ladder and enter the lift. Ride it up, and make your way across the spinning blades. Ride the lift up on the other side, and activate the panel near the Mad Scientist (or near his bloody carcass). This will open up a compartment to your left where you'll find the Singularity Access keycard. Grab it, and make your way across the spinning blades to the lift. Ride it down, activate the console, and enter into the room where you found the hole. Go through the door, and hug the left wall until you get to a room with a window overlooking the Singularity Generator. Enter the room, grab the gun, and go out the other door. Go through another door to end the level."--Baytor's Guide

As Caleb moves through the tunnel leading to R&D, the Mad Scientist comes on the loudspeaker.

MAD SCIENTIST: Hello, hello, hello. Hello, hello. Welcome to Research and Development or as I like to call it, R & D, hee, hee. You may call me... uh, Doctor. I've had some rather interesting subjects lately with all the fluctuations in the cosmic substring. But, I must say I'm especially looking forward to your... dissection. Hee, hee, hee. Please, proceed to the main lab and we'll begin the experiment.

Caleb finds that he does not yet have access to the main door, and instead takes a right and encounters an exhibit full of captured Shikari in a simulated natural environment. Inside the exhibit he finds a CabalCo Access Card, which he uses to open the main door. He lowers a lift and enters a maze of hallways, with the adjoining rooms filled with more enclosed exhibits of Shikari and Bone Leechs, as well as other experiments, most of which are being studied by CabalCo scientists.

He encounters another door he does not have access to, and finds a room which is blocked off by a force field. In the hallway he finds a way into the ventilation ducts, and uses it to enter the room that was previously made inaccessible by the force-field. There he finds another CabalCo Access Card and uses it to open the inaccessible door. Inside he finds another maze of hallways, one of which leads into a hall filled with cells containing people succumbing to the Bone Leech parasites, as well as some who have already succumbed and have now turned into Soul Drudges.

Caleb eventually finds another inaccessible door with a sign out front stating "TESTING IN PROGRESS". Caleb also finds another room filled with Shikari which leads to a lift which Caleb can not access. He looks around and finds a crack in the floor, and enters an underground tunnel filled with noxious green water and explodable barrels. At the end of it he finds a ladder which, conveniently enough, takes him to the lift he saw earlier.

Ascending the lift takes him to the room the Mad Scientist was speaking from earlier. Caleb hops onto and over the fan blades, getting past his Prophet bodyguard and Cultist helpers, and then deals with him as he sees fit. Pressing a panel opens a cove in the wall containing yet another CablCo Access Card, which Caleb uses on the inaccessible door he found earlier. Inside he finds a gaggle of scientists observing their latest creation: the Singularity Generator. Caleb can then take the weapon, and leave the area through another door in the room.