C4L1: Beyond the Rift 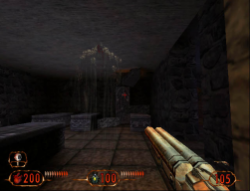 C4L1: Beyond the Rift is the thirty-first level in the game Blood II: The Chosen, and the first level of the fourth chapter (map name: 24_ancientcity). Caleb finds himself in a mysterious desert world. He has his final fight with Gideon and explores the ruins of an ancient city to get to the Ancient One, the being responsible for the intrusions into the real world.

Level 1: Beyond the Rift
CITY OF THE SOON-TO-BE-DAMNED

It's a battle to the death. Preferably someone else's. Gideon's puppet strings can no longer be pulled and the puppeteer's comeuppance has just come up. Ancient One? Are you listening? Then hear this...

"Note: The city is pretty big, and there's ammo stashed all over the place. I won't be pointing any of it out. Just remember to smash all your boxes and gib all the corpses you find. They often contain useful items. Make your way past the Behomoth into the cave. Find the entrance to the city at the end of the cave and enter it. Defeat Gideon and a couple of doors will open. One of them has a hole in the side of it. Jump into the hole and pull the lever. Jump down through the window, and go through the newly opened door over to your right. Follow the path along until you come to a small bridge. Cross it and then head to your left. If you hug the left wall, you'll find a passage leading to a Willpower power-up. Walk back out of the passage, and continue to hug the left wall, and you'll come to another bridge. Cross it, push the button, and enter the door. Smash the vase in front of you for a ward, then follow the passage until you get to the two sets of stairs. Take the ones on your right and hug the right wall. You'll eventually see a passage to your right with some stairs. Climb them and pull the wooden lever at the top. Continue on, and jump across to the ledge with the Life Seed and the Necroward. Now hug the left wall until you get to a stone door. Go through it to end the level."--Baytor's Guide

Gideon as Something Unpleasant

The portal deposits Caleb on an altar in the middle of a rocky desert. There is a Cabalco encampment nearby, with a lonely flag, some cargo containers, and a host of dead Fanatics. Caleb follows the corpses to a ruined temple, where he finds Gideon standing there, waiting for him.

GIDEON: Ah, Caleb, I've been expecting you, you predictable oaf. I won't be a minute. I'm just changing into something unpleasant.

The camera pans around Caleb, disguising Gideon's transformation. When it returns, he has transformed into a giant spider.

GIDEON: What do you think of my new look?

CALEB: Ugh, and I thought I was ugly.

GIDEON: You have no idea how exquisite pain can feel. Allow me to demonstrate.

GIDEON: I mean on you!

Caleb and Gideon fight, with Caleb the obvious victor.

CALEB: When you get to hell, tell 'em I sent you. You'll get a discount.

CALEB: Life's not fair, but neither is death. Get used to it!

With Gideon dead, Caleb exits the temple, either looking for a way back home, or for the Ancient One.