Cultists are the lowest ranking members of the Cabal - the "grunts" of Tchernobog's army.  They have the least strength, but are plentiful.  Cultists are the most common enemy in Blood and Blood II.

Cultists (who are sometimes called "Monks" by fans) are everywhere, hunting for Caleb. They dress in brown/beige robes with a yellow belt and have hideous disfigured faces that they hide under their hoods. They typically wield sawed-off shotguns (but only discharge one barrel at a time, unlike Caleb who can discharge both barrels), or lob TNT bundles like grenades at higher difficulty levels.

They are not terribly smart, but hide behind doors or walls. They frequently give themselves away by shouting cultist curses like "bibox mala" and "crudux cruo". They are suprisingly accurate and deadly, and can serve as a great threat while larger enemies like gargoyles attack.

"These bad boys are the chief minions of the Cabal and it won't take you long to develop a deep, abiding hatred toward them. If you interrupt their dark rituals, they'll want to teach you a lesson in respect. They're equally fond of shotguns, Tommy guns, and dynamite, so be sure you're ready for a fight before you tangle with them. Their long service to the Cabal has eroded their fear as well as their sanity, and they'll stop at nothing to feed your soul to their dark master." --From the Blood Instruction Manual 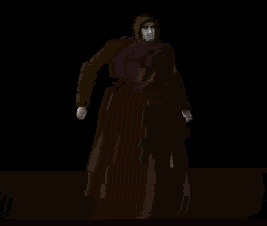 The robed cultists reappear in the Nightmare Levels, when Caleb flashes back to his battle in the frozen north. Again they wield sawed-off shotguns and spout cultist curses.

In Blood II, cultists are still the lowest-ranking minions of the Cabal, serving as cannon fodder, but are much less deadly and accurate. With the conversion of the Cabal to a corporate empire, so has its staff. These are early CabalCo initiates that are recruited and brainwashed into service. Their training consists only of a psyche profile and brain wipe.

Within the company, they are used for missions of little importance - security and intimidation - and have low intelligence. Otherwise, they would have risen to a higher rank in the Cabal. Often they are used as human shields or distractions for more important Cabal members.

They wield pistols and flare guns only, and their lack of combat training prevents them from knowing how to coordinate an effective attack. They are more of an annoyance than their previous incarnations, and lack firepower and accuracy.