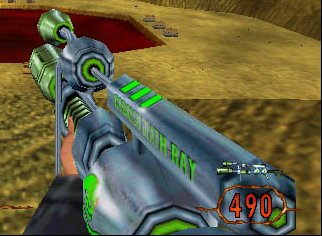 "From the Cabalco's advanced weapons division comes the next step in urban warfare, the Cabalco Death Ray. This weapon delivers on its promise, firing beams of pure energy that reflect off of most surfaces so you can get that 'around the corner' kill."--Blood II: The Chosen Manual

The CabalCo Death Ray is a somewhat secret weapon in Blood II: The Chosen. It originated in the "CabalCo Advanced Weapons Division" as the "next step in urban warfare". It fires a precise laser that bounces off walls randomly, causing damage to whatever it hits, so the player is forced to plan his/her shot before firing. It isn't exactly a killer, but has good damage and makes enemies flinch, usually on the first hit. The alt-fire isn't worthy to use for its shorter range, long warm up and doubled ammo consumption, despite having a faster rate of fire.