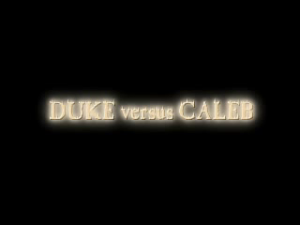 Duke versus Caleb (or Duke vs Caleb) is a stop-motion video series featuring a battle between Duke Nukem and Caleb. The characters and setting were all built using Lego, with the exception of a few Blood boss sprites (Cheogh, Shial, Cerberus and Tchernobog). It was created by Darkone1349 and Karle696, and was uploaded to YouTube on July 10, 2008 after first being completed on November 9, 2006. A spin-off video, Caleb vs Jason, was uploaded October 20, 2008. An alternate ending and a deleted scenes video was uploaded on January 6, 2009. 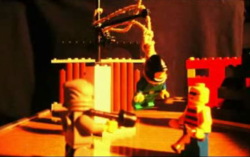 Duke Nukem and a Cultist

After Duke Nukem defeats a lackey of Dr. Proton who was messing with time travel in an attempt to destroy Duke's ancestors (similar to the plot of Duke Nukem: Zero Hour), he finds a transporter and is taken to old west Texas, where he meets a young Caleb aboard a moving train (styled after E1M3: Phantom Express). After a brief meeting with Caleb, witnessing him slaying many Cabal and innocent bystanders, Duke is transported back to his own time. Duke returns to find that his employers, the Earth Defense Force (EDF), are under attack by aliens. Fighting his way through the base, Duke makes it to a transporter, which he proceeds to travel through after a cyborg alien. 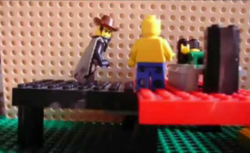 Caleb & Duke at the Altar of Stone

Back in the old west, Caleb joins and ascends to the Cabal rank of Chosen, before he and his comrades are betrayed and slain. Caleb lies in a hallow grave for fifty seven years before rising again to take on Tchernobog. Traveling through several Cabal infested areas, Caleb sees many grisly things, and commits even more. Meanwhile, Duke Nukem is transported into the very Cabal temple where Caleb is taking on several cultists. Duke starts to explore the area, and makes his way to the Altar of Stone where he finds Ophelia slain by the cyborg alien, which Duke promptly takes out. While Duke is trying to chat up Ophelia, Caleb walks up from behind, causing Duke to run and transport away. Caleb then continues on with his journey of bloodshed and revenge, making his way to the Hall of the Epiphany. Tchernobog reveals his plans to Caleb and explains why he and the Chosen were cast down. Caleb fights through the Hall and dramatically defeats Tchernobog after a viscous fire fight.

For the next seventy nine years he "hangs out in bars and drinks cheap beer", while the Cabal regroup and grow (into CabalCo). Meanwhile, Duke, returning from defeating the Rigelatins, finds that Los Angles is being invaded by aliens (the stage is from E1M1: Hollywood Holocaust of Duke Nukem 3D). While Duke is killing the invaders, Caleb enters a bar and starts to drink. Soon after, Duke enters the same bar and orders his own drinks. Caleb recognizes Duke from before and starts to taunt him, with Duke more than happy to reply with some retorts of his own. A three way battle begins against Caleb, Duke and the aliens, with Caleb and Duke uttering many of their famous one-liners. 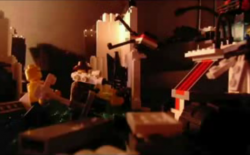 Caleb and Duke fight the Robot

Caleb chases Duke Nukem out of the bar and through a CabalCo research area (similar to C3L7: Research and Development), while fighting more aliens and Cabal. Confronting Duke once again, Caleb is interrupted by a prophet (similar to an instance in C1L7: Movin' On Up), which Caleb takes out with a throw of his knife. Duke and Caleb promptly return to their battle, climbing their way up the rooftops where Caleb will one day face Gideon. While fighting, the two are interrupted yet again, this time by a giant robot. It takes out Caleb by tossing him away, before being attacked by Duke. After fighting back Duke, the robot is attacked by Caleb from behind. The metallic monstrosity simply chucks Caleb off again, and he and Duke haul themselves up, united against a common enemy. Suddenly JoJo (aka Ishmael) transports in, chats a little, and transports away again, leaving a gun. Caleb grabs the weapon and uses it to destroy the robot. Returning to their quarrel, Caleb chases Duke towards a transporter, and they both head through it.

They arrive back in Texas, a day before Caleb is too be resurrected, and stage a classic western duel. Duke and Caleb fire, Caleb's shots miss, but Duke's hit Caleb dead on, and he falls to the ground. A triumphant Duke walks towards his victim, before a skeletal Caleb suddenly hauls himself up and stabs Duke. The screen turns to black as Caleb comments "now kids, don't try this at home". A death count appears, "Enemies: 09, Duke: 28, Caleb: 38, Total: 75". The credits start to roll before some animations made from various Blood and Duke Nukem 3D sprites play (a reference to some similar animations in Blood), with Caleb and Duke hunting each other, among other things.

Duke Nukem and Caleb battle it out on top of a moving locomotive in 1867 Texas (again styled after E1M3: Phantom Express). Duke punches Caleb forcing him to grab hold of the side of the box car, Duke taunts "end of the line" (which is also one of Caleb's known lines) before forcing him off the train. Caleb survives and moves off to follow the train after Duke and continue the confrontation. 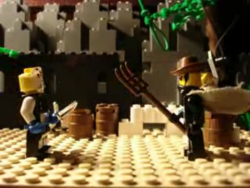 A movie showing the set up for a scene in Duke versus Caleb.

A trailer for Duke versus Caleb, which sets out the coming duel between the two Build engine game characters.

Some deleted scenes from Duke versus Caleb, mostly action sequences starring Duke Nukem, with a few showing Caleb including one with him playing his favourite game of "Head Soccer".

A short animation pitting Caleb against Jason Voorhees of Friday the 13th fame, made with the same Legos as Duke versus Caleb (Jason had a brief cameo killing in the EDF base). It was created to test a new camera. 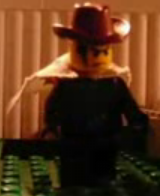 Caleb made in Lego