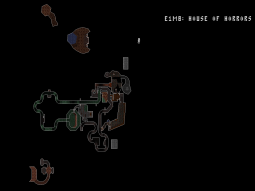 House of Horrors (E1M8) is a secret level in the first episode in Blood. It is accessible through a secret, difficult-to-reach pathway in E1M4: Dark Carnival. The level represents a roller-coaster ride, still under construction, with many traps and unfinished portions. 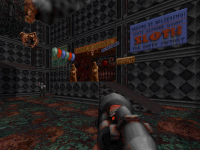 "Follow the passage to a gate. Open the gate, go up the ramp, and open the face to the fun house. Follow the path along until you get to the spot where you have green water to your left. Jump in and follow it along until you get to gate which blocks your way. Shoot out the bars with the zombies behind it, and jump up in it. A security booth will open before you. Jump into it, and pull the lever to open the gates. Follow it along until you see an "Under Construction" sign, quickly jump into the niche to your left, and take the lift down. You'll see another section with green water past the unreconstructed part, so jump up in it, and continue along. Eventually, you come to a large room, with the Skull key beyond your reach. Drop down, and grab the Diving suit from behind the waterfall. Walk toward the 'Spine Crusher' sign, and you'll drop down underwater. Go through the passage to your right, and continue along until you get to a metal room. Swim into the room to your left, turn around, and push the switch on the left side. A room will open up in front of you releasing some bone eels, and a passage will open over to the left. Swim out of the room, and take the passage to your left. Follow the passage, and you'll eventually surface in a torture chamber and the Skull key door. Take the stairs in front of you, and collect the Skull key from the ledge. Return, and open up the Skull key door. Take the path to your left, and follow the long, winding passage until you find a wooden door on your right. Open it, and follow it up to a room filled with wood. Jump out the window in front of you onto a sloped ledge, and shoot out the X-shaped boards to your right. Jump through the newly opened space into an area filled with TNT barrels. Shoot the barrels until you find the one which blows a hole in the wall (it's all the way around). Jump into the hole, and into the small pool of water. Follow the underwater passage and surface. Jump out of the water and hit the symbol to end the level."
--Baytor's Guide