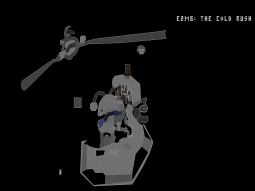 The Cold Rush (E2M6) is the sixth level of the second episode in Blood. The level resembles an abandoned mining town and mine. 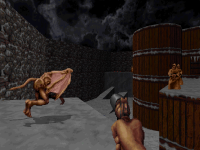 "Follow the passage out onto the ice. Make your way over to the right, and you'll find a narrow stream. Jump over it, turn to your right, and you'll see a passage in the rock face. Jump up the ice to get to it, and follow the passage. When you can't go any farther, look to your left, and you'll see a ledge. Jump on it. Turn right, and go forward, making two more jumps. Follow that ledge around to the end, jump to the next ledge on your left, and follow that one to the end. At the end of the ledge, you'll see two passages across the chasm, you want to go to the lower of the two. Jump on over, collect the Skull key, then jump back out, and go to the higher passage. Follow the passage, and you'll come to a ledge overlooking your starting position. Jump down onto the building to your left, and you'll find the Skull key door. Enter it, go down the stairs, and enter the metal door across the hall. Push the button, walk out the room, and turn to your right. You'll see another flight of stairs, climb these, and go out the Skull key door on the second floor. To your left, you'll see a circular area with a button. Step in, and push the button. The room will spin around, revealing a switch. Push it, and you'll see a door open outside the window. Now go back to spinning room, and hit the button again. Jump across to the ledge where the door just opened, enter it, and push the symbol to end the level."
--Baytor's Guide

Go into the first open area and kill everything. Next to the tunnel you came from is another short tunnel with some Zombies. Kill them. In the next open area Cultists will snipe you from the building and gargoyles will swoop from above. Kill them all. Run up the ice slope and jump onto the building near the silo-shaped structure. Open the only unlocked door. There is an opening above you. Look up and see if there is a Cultist waiting. Toss some dynamite up there. Put on your boots and jump up. Unlock the door with the lever, open the door, and kill the Cultist. Do a running jump across to the big doors. Turn around. A Fanatic will shoot out the window. Shoot him and use the boots to jump in the window. There are switches to open the big doors and open a wall back to the ledge. Jump across and there is the exit to the next level.