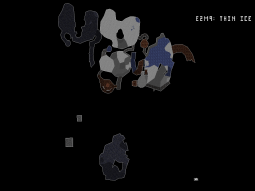 Thin Ice (E2M9) is the secret level in the second episode in Blood. It is accessible by collecting five tomes in E2M4: The Overlooked Hotel, which opens a gateway. The level resembles a treacherous ice cavern/cliff. 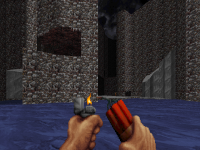 "Follow the passage, jump down on the ice below you, and swim over to the area on the left. Over on the far right of the area is a small niche with a dynamite detonator in it. Activate it, and a passage will open up behind you. Follow the passage into the water, swim into the next area, and find a hole in the ice above you. Surface and enter into the area over on the left. Jump up over the ice, and when you walk across the the next area the ice will open up underneath you. Jump in and you'll see two underwater passages. Take the one that up near the surface of the water, follow it, and surface when you reach the end of the passage. Walk along until you get to the room with the fire in the middle of it. Walk up the ramp to over on the right side of the room, and follow it to the lift. Take the lift up, and blow up the TNT barrels in the middle of the ice. After all the ice falls, you'll notice a narrow ledge over to your right. Follow it along, jumping over the gaps in the ice. Just keep following the path you're on (through various rooms and ledges), and you'll eventually come to the Skull key. Grab it. Turn around, and make a difficult jump onto the ice tower. Jump on the next one, and then down to the area with the Life Seed. After picking up the Life Seed, turn to your left, and jump on the ice leading up to the ledge. Now follow the ledge around, until you get to the Skull key door. Open it, and push the symbol to end the level"--Baytor's Guide

This is the first time when the Napalm Launcher becomes available to the player. It is in the area just after the Bone Eels. It is found on the left of the area, where there are two Bloated Butchers, three Zombies, and a Gargoyle.