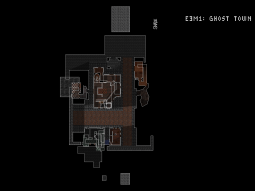 Ghost Town (E3M1) is the first level of the third episode in Blood. It takes place in a European town (possibly a town in France) during an air raid. 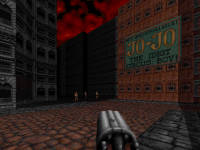 "In front of you is the Fire key door, take note for future reference. Walk forward, and turn to your left. You'll see a gray door on the second building on your left. Enter it, and you'll see the Spider key door. Turn right, and follow the hall around. Kill the cultist to get the Spider key. Go back, and open the Spider key door. Go up the stairs until you reach the stucked door. Shoot the fire extinguisher, and a hole opens up into the next building. Jump over to the other building, go up the stairs, past the innocents, up another flight of stairs, and you'll find another hole in the wall. Jump into the hole across the alley. Go up the stairs, through the gray door, and ignore the "Stay Out" sign. Enter that room, and kill the ghost to collect the Moon key. Go back out to the street, and you'll see a hole blasted in the side of building to the left of the JoJo sign. Enter it, and another hole blows open. Jump up into it, and you'll find the Moon key door. Enter it, and pick up the Fire key door, and go back to the street. Go through the Fire key door (one of them won't open), follow the hall to your right, and you'll find yourself in a fairly large room. Jump up over the counter, and enter the Manager's office to pick up the Skull key. As you leave the Manager's office, you'll see another door in front of you. Go through it, up the stairs, and through another door. When you pass by the window, look out of it. You'll see a crack in the wall. Blow it up, but don't jump over yet. Continue along the hall , and you'll eventually come to the Skull key door. Go in, grab the Dagger key, and return to the hole you just blew up. Jump across, go through the Dagger key door, and push the symbol to end the level."--Baytor's Guide