Difference between revisions of "E4M5: Fire and Brimstone" 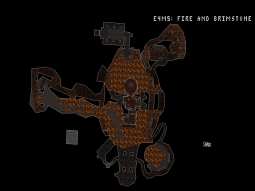 Fire and Brimstone (E4M5) is the fifth level of the fourth episode in Blood. It takes place in an underground cavern filled with lava and stone (as close to conventional images of hell as you can get), and moves up to a temple on the mountain. 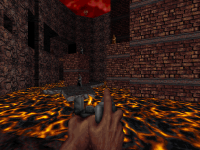 "Walk forward, and jump across the lava onto the path. Follow it along to the end. Turn to your left, and jump across to the part of the path. As you get to the end of the cave, you'll find a ramp leading up to your right, so follow it. It goes on for a while, but you'll eventually cross a short wooden bridge. To your left, is a pillar with a voodoo doll on it. Jump on it, then across to the next ledge, and then again to the next ledge. Turn to your left and follow the passage. You'll eventually come to a room with the Skull key. Just as you enter the room, you'll see a staircase on the left side of the room. Grab the key, and go up the stairs. Follow the path along, across the narrow ledge into the building. Walk forward, and go through the Skull key door. At the end of the room, take the wooden bridge to your left, and follow the ledge into the temple. As you come into the pillared room, you'll see a stone design behind the altar. Open it, and push the symbol behind it to end the level."--Baytor's Guide