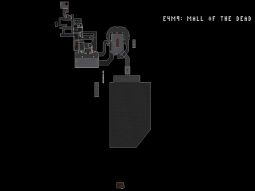 Mall of the Dead (E4M9) is the secret level in the fourth episode in Blood. It is accessible by a hidden wall in the cavern near the end of E4M4: Crystal Lake. The level takes place in a mall, invaded by zombies and gargoyles. It is generally regarded as one of the most popular levels. 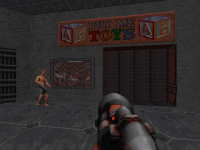 Mall of the Dead

"Walk forward into the next room, and go up the escalator in front of you. Turn left, walk to the wall, turn left, and go up the ramp. Enter the K-Marche, and go into room to your right. Kill the stone gargoyle to get the Skull key. Go back outside the K-Marche. Turn to your right, and follow the passage around to the Skull key door. Go up the steps, and turn right. You'll see a couple of vents. The one in front of you a secret area (use the boots to get to it), so jump up into the one to your right. Follow it to the store room. Over to the left of the store room is a stack of crates leading up to a hole in the roof. Jump up into the roof, and push the symbol to end the level."--Baytor's Guide