From Blood Wiki
(Redirected from E5M6: Graveyard)
Jump to navigationJump to search 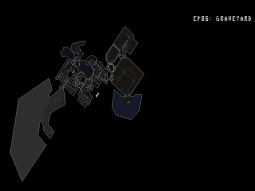 "If you're lucky enough to survive your river journey, you may find yourself on the rivers edge, next to this frightful place! The graveyard is not only dark, but full of lost souls and hungry dead looking for a fresh meal. Rumor has it that the only way out of the old graveyard is underground through one of the old crypts. Some even say that somewhere in the depths of the old place is a secret path to Boggy Creek, but no one has ever returned to tell."--Cryptic Passage README.TXT

Graveyard (CP06) is the sixth level of Cryptic Passage, the first expansion pack for Blood, colloquially known as Episode 5. It takes place in an graveyard. It also holds access to the secret level, E5M10: Boggy Creek, and breaks from tradition by putting access in the sixth level instead of the fourth. 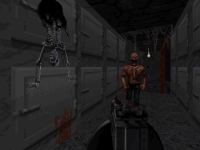 "Go forward, and up the steps. Follow the walkway, but do not enter the next area of the graveyard (take note of the Skull key door on the tomb though). Instead, look to your right and you'll see a passage. Enter the passage, and follow the walkway all the way to a room with three posts. On one of the posts is a switch. Hit it, and the middle post will lower revealing the Skull key. Grab it, and retrace your steps, and enter Skull key door. After you go down the steps, you'll find yourself in what appears to be a dead end. But you'll notice that one of the tombs is blood stained. Push it, and a passage opens up behind it. Follow that path, and after you go through a wooden door, you'll come to a fork in the passage. Down the left fork lies the Dagger key door (take note of it). Since you don't have the key, take the right fork. When you get to the room with hole in the floor jump in. Hit the switch, wait for the panel to lower, grab the Dagger key, and go up the stairs to the room you just jump down from. Now go back down the steps, and enter the Dagger key door. You'll soon find yourself in a room with the Fire key door, the Eye key door, and a wooden door. Go through the wooden door, and then through another wooden door, and you'll be in a room with a wooden staircase and a short hallway. Go up the stairs, through a couple of wooden doors, down the steps, and pull the lever. You'll see that a switch is now opened in the short hallway. Retrace your steps, go down the hallway, hit the switch, and through the door it opens. On the other side of this room are two staircases leading up, take either one of them, and push the hand on the wall at the top of the stairs. This opens up a switch behind you, hit it, and the Eye key is revealed. Quickly jump on the beam, cross it, and collect the Eye key. Now retrace your steps to the Eye key door. Go through the Eye key door, and you'll see a wooden door and a pool of water. Jump in the water. Near the bottom on the right side, you'll find a switch. Hit it, and surface, and go through the now-opened door. Go down some steps, through another wooden door, and up the stairs. Drop down the hole, and look around. You'll find a wooden door with a lever next to (we'll use this later), and another wooden door. Enter the wooden door, go through the hole in the wall to your right, grab the Fire key, and return to the door with the lever next to it. Pull the lever, and go through the door. Now go through the door to your right, up the steps, and you'll find yourself next to the pool of water again. Just walk through the door, up the steps, and through the Fire key door. Follow the path along, across a bridge, through some doors, until you get to the room with the fireplace. To get to the secret level, jump into the fireplace, and follow the passage to the symbol to end the level. For completion sake, I'll include the regular exit. Go up the steps, hit the switch to raise some stairs, then climb the stairs, and follow the passage to the symbol to end the level."--Baytor's Guide