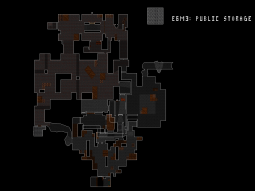 They Are Here (E6M2) is the second level of Plasma Pak, an expansion for Blood, also known as Episode 6. It takes place in an outdoor shopping plaza. 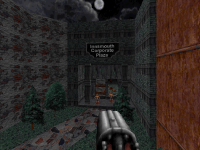 "Walk out the opening room, jump down, turn to your right, and walk down to the end of the alley. Turn to your right and enter into the building. Following the passage until you get into a larger room, then take the exit to the right into a courtyard. Re-enter the building under the sign 'Insmouth Corporate Plaza'. Directly across from the phones is some stairs leading up. Follow the corridor, and you find yourself in a room with some steps. Climb them, and follow that corridor to the Pub and Grill. Exit the building to the door to your left. Outside, you'll see the Fire door behind some Fire pods, turn left, and walk along the side of the building you just exited, and and re-enter the building through a different doorway. Walk down the corridors, descend the stairs (Watch out for the Gargoyle statues), and grab the Skull key. Retrace your steps to the Fire door, open it, and press the symbol to end the level."--Baytor's Guide