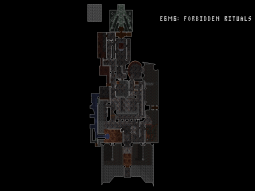 Forbidden Rituals (E6M6) is the sixth level of Plasma Pak, an expansion for Blood, also known as Episode 6. It takes place within a temple complex, filled with zombies and all varieties of cultists. 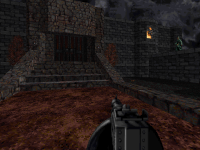 "After you go through the wooden door, go over to your right, and collect the Dagger key. Use it to go through the Dagger key door in the same area. Go forward, and go through the small wooden door to your left. Shoot the X-shaped beams, and drop down. Jump down into the pit. Follow the passage, shoot your way through the grate which blocks your way, and keep following the passage until you get to the caged zombie. Pick up the Moon key, and take the lift up. Follow the passage along until you get to the forbidden ritual with the pool of red water in the center. From here, you'll see the Moon key door. Shoot the symbol above the Moon key door, and the wall to your left will open up to reveal the exit to the secret level. The regular exit is behind the Moon key door. Just take the lift down to get to it."
--Baytor's Guide