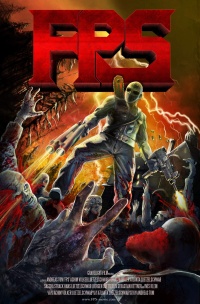 FPS - First Person Shooter is a German independent film created by Gravelight Film which stars the voice of Stephan Weyte as the protagonist. Created as a tribute to the first-person shooter games of the 1990s (specifically Doom, Quake, Duke Nukem 3D and Blood) as well as the horror films of the 1980s (such as The Evil Dead), it is filmed using a first person perspective similar to those present in the actual games.

The story is as follows: "Your pregnant wife Linda has been captured by a ruthless scientist, who created a devastating virus. To rescue her, you have to fight through the old rotten experimental clinic, armed to the teeth, one level after another right through the dark, decayed guts of this evil complex. Unfortunately you don't have much time, at dawn, the whole area will be eradicated."

Gravelight Film is currently heading for festivals and are looking for a distributor for the film. It had its international premiere at the 10th anniversary of the Fright Nights Film Festival in Vienna, Austria. The film is now currently available for purchase as both a DVD or Blu-ray from Amazon.com, and is also limitedly available from iTunes.

It has received mixed to positive reviews from online critics. Horror Society gave it an enthusiastic reception, while Dread Central was disappointed and Thy Demons be Scribblin gave it a measured recommendation. The Bloodline website also gave it a positive review, only noting that its low budget sometimes shows. User:Gideon of the Blood Wiki gave it a mixed review, commending its effort but criticizing its editing. In its native Germany reception was higher, receiving scores of 8.5/10 from Splatgore and Watch the Shit, and was voted a 4.3/5 by Angst Rated.