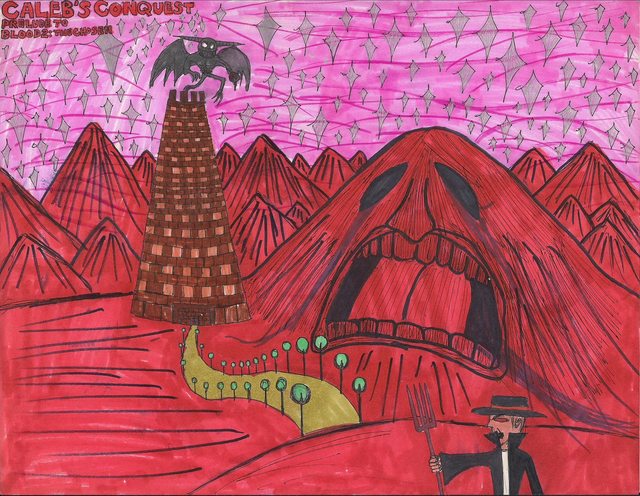 A piece of artwork created by BEAST and released January 2014.

"Done between 2006-2008? I know that I did it when I was excited by kurt fuhr's B2R project, and then though of doing my own kind of B2 project which was intended for as a level for Dark Forces II: Jedi Knight. Keep in mind again, I had no experience in modding, and I still never had the time to see if I could do mods or levels. I thought of doing a prequel set of levels set before the events of B2, when Caleb was wandering through Tchernobog's dimension to search for one of the items needed to awaken the Chosen. One level was supposed to be set in a 1950s-styled suburban neighborhood in the middle of the blood-colored desert, populated with zombie versions of 1950s white American suburbanites. The level was supposed to be a little bit of a tribute to Dark Seed II and Mullholland Falls. After Cabal cultists raid the neighborhood like gangsters, Caleb makes his way to through the bloody landscape to the Cabal castle which holds what he wants. The Stone Gargoyle seen above the tower, which is way bigger than your usual Stone Gargoyle, is supposed to be Cheogh's grandfather." - http://forums.transfusion-game.com/viewtopic.php?p=28468#p28468

The following 2 pages link to this file: