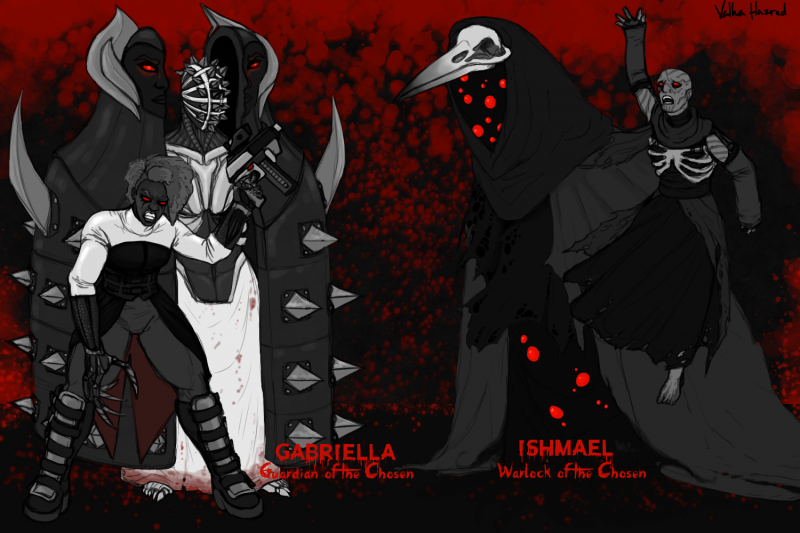 "Gabriella is a Justicar of the Cabal Megacorp in the year 21XX. For a long time she had been content in her lot, keeping the peace and order of Neo San-Francisco and never really questioning the will of the corpocrats that commanded her. However she's been dreaming lately of a group of friends closer than family, of fighting for something bigger than a company and it all falling apart. Was there a giant spider there? Gabriella never was a fan of spiders...

Gabriella's episode would be set in a classic cyberpunk San-Francisco in the style of late 90s anime, with a side order of Technohorror as Cabal experiments unleash demonic cyborgs in the first level. Once Caleb opens the portal between worlds the race is on to pull Gabriella out of the doomed reality!

Her playstyle is much more deliberate than either Caleb or Ophelia. She is relatively slow with a large healthpool and her weapons reward accuracy and patience. Her Chosen form, the Guardian, can pummel enemies with her inverted iron maiden or absorb damage to fire it back in a hail of razor shards.

Caleb: "Gabriella, huh? How did that happen?" Gabriella: "To make a long story short, in this world it is easy to discover who you are inside. After that what you want to be is only a matter of credit." Caleb pointedly looks her up and down: "And what are you exactly?" Gabriella gives him a long flat stare: "Chosen" Caleb laughs, slightly nastily: "Good enough for me!"

(I always thought Gabriella's "long story" excuse was a total cop out.)

Ishmael is living in the shadow of the Old Ones. In his world armies of mad cultists wage constant war in the name of indifferent but very real gods. Unlike the other Chosen, Ishmael's mastery of magic has left him with his memories of his other life entirely intact and he's been waiting for Caleb's arrival. As soon as the portal opens Ismael is ready to lead him against the local Cabal and the shadow of Tchernobog that leads them.

This episode winds through iron citadels where advanced technology blend with medieval construction, blood drenched trenches in endless battlefields and even within the rotting corpses of dead gods.

Ishmael is the most fragile of the Chosen but his weapons and spells make up for it in their devastating effect. They are all projectile based and carry a frequent risk of self-harm however. His Warlock form is capable of attacking with vampiric shadow tendrils and launching highly explosive spells that makes enemies killed by it explode themselves!"

There are no pages that use this file.