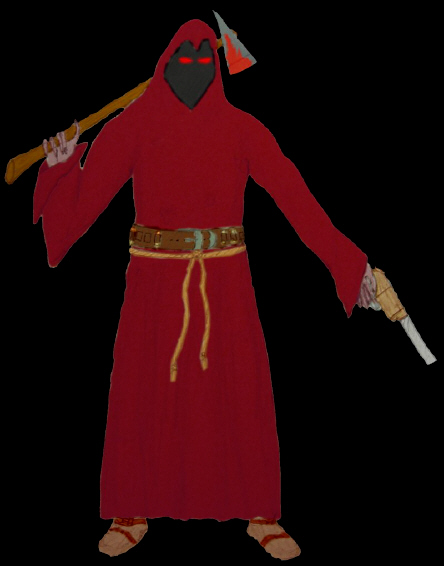 Fantasized portrait of RedFanatic, the creator of Purgatory and co-creator of Bloody Pulp Fiction.

"An Acolyte of the order of the Beast RedFanatic had served his sect for years, sacrificing and praying to his evil master. As he rose through the ranks he often heard of the great reward for service that lay at then end of a long road of pain and loyalty, Though daunting this was his goal. But as he progressed rumors filtered down the order as to the nature of 'True Devotion'. Questions gnawed at hi mind. What where the strange inhuman noises coming from the Forbidden halls? Why was physical fitness so important? and perhaps most importantly What IS the Beast. With the destruction of the Cabal things became more tense and a pressure was felt within the Temple to speed up the complicated traditions and processes required, all felt that it was only a matter of time before the Heretic Caleb would arrive and with the relative size of the Cabal to the Order everyone knew only by bringing the Beast through into the Human plain would they stand a chance of survival. But as night after restless night passed RF could take it no longer and during the darkest of nights slipped from his room and entered the Forbidden Halls, Within he was greeted by true Horror's the twisted forms of previous Acolytes some still clinging to a shred of miserable life others preserved in huge tubs of formaldehyde. But beyond this he found the 'Tapestry' a terrible text made of the skins of the devoted and handed down for decades. It told of the meaning of 'True Devotion' the becoming of a vessel for the Beast, the loss of all mind and body and the torment of utter dominance by demonic forces. Trapped and already infected by the terrible powers of demon spawn RF was only saved by the arrival of Caleb, with only one day to spare before his 'Ascendance', Now freed from his fate by the death of the Beast at the hands of Caleb but twisted and mutated from his 'Training' RF wanders the dark and evil corners of the world exacting his revenge on all Demon kind and their worshippers."

The following page uses this file: