The Flare Gun (or Flare Pistol) is a weapon in Blood and Blood II: The Chosen, capable of fire damage.

"Fires burning projectiles that lodge easily in flesh and continue to burn for a short period of time. Unless you dive into water, you'll take damage until the flare burns itself out, by which time it may be too late. The alternative fire launches a starburst flare that douses a large area with flames. Can provide effective crowd control."--Blood Manual

The Flare Gun is the first firearm picked up, found in the courtyard of the Morningside Funeral Parlor. It functions much like a pistol, but fires flares which stick in the victim and burn for a short period of time. If the victim dies while this happens, he will ignite and run at the player, screaming "It burns! It burns!". Diving into water will douse the flare.
AMMO TYPE: Flares
REGULAR FIRE: Fires a single flare which embeds in the victim's flesh
ALTERNATE FIRE: Fires a starburst of flares which exploded on contact

The Flare Gun is particularly useful when trying to get rid of enemies at a distance; a single flare is able set a Cultist or Fanatic's robes on fire, and two can take down a Zombie. The Flare Gun's alt-fire, which consumes 8 flares per shot, is very similar to the Napalm Launcher's normal fire, and is a good substitute if the player doesn't have napalm to spare.

The Flare Gun drew from several influences and had multiple iterations in its design:

"Flare guns have been used in several movies. For Blood, we wanted a similar weapon felt and looked realistic while not compromising game play. The flare gun itself went through several incarnations. First we bought a modern marine flare pistol; one you would commonly find on a boat. Here is where complete [realism] would have compromised the weapon. Marine flare pistols are tiny, orange and look exactly like toys ... . We found the answer to our flare gun dilemma among more historical weapons, just as we had for Blood's Tommy Gun and sawed-off shotgun. There were several antique brass flare pistols used by the Army that looked and felt adequate for Blood. We used these as a model for Blood's flare pistol. The result is something no one would pinpoint as a military weapon, and yet is still based heavily in reality."--Nick Newhard

"The flare gun is a special weapon that fires flare-like projectiles that stick into targets and burn them over time. It has a medium rate of fire, and it projectiles move fairly quickly. The alt fire shoots a flare that bursts into a star pattern. The star flares explode on contact with objects, assigning burn time to anything they hit."--Blood II: The Chosen Manual 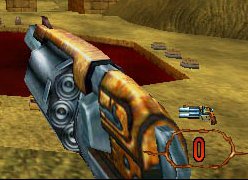 The Flare Gun can now fire flares of different colours, but functions the exact same way as its Blood counterpart.

AMMO TYPE: Flares
REGULAR FIRE: Fires a single flare which embeds in the victim's flesh
ALTERNATE FIRE: Fires a starburst of flares which exploded on contact