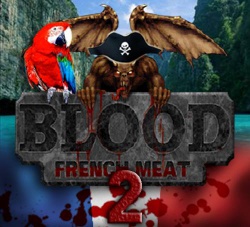 "After the French Meat episode for BLOOD, the second with 8 new maps including new tiles and sountracks for an adventure with a unique atmosphere immersed in the heart of paradise island colonized by the pirates of Cabal! kill them all, make a maximum of death, blow them up, slaughter them wherever they are."--BleuBlancBlood

French Meat is a single-player one episode fan add-on for Blood, featuring eight maps which was created between 2013 to November 2019, and is the sequel to the original French Meat (2012). Unlike the original, it features new art assets in the form of a reworked TILES018.ART, including several pieces from Cryptic Passage and new graphics to aid in its tropical island setting. The original episode is also included, with some upgrades, as well as a bonus level in the third episode slot.

Caleb arrives on the palm filled beaches of Paradise Island, and infiltrates a series of huts, sheds, halls and caves interconnected with a series of wooden trestle bridges (TEDE2M1: Sea, Cabal and sun)

He ascends and descends through the rickety passages running through several inland rivers and waterfalls, and comes across a harbour for an aquarium for bone eels and gill beasts. Exploring both floors of the winding complex, the lower the viewing galleries and the upper for maintenance, Caleb descends the crane loading a nearby boat moored in the dock. This allows him to climb up and venture through the warehouse to the back-lot to make his escape using a motor boat (TEDE2M2: Waterfalls).

Screamshots from a sequel to French Meat were released, following an initial announcement on April 5, 2014. More screamshots were released on October 2, 2019, which indicated that the mod was still being worked on.